Living Legends brings together retired champions. They may have slowed but they still have plenty to give, writes Max Presnell of the Sydney Morning Herald.

After their glory days, great horses, and the not-so-outstanding Melbourne Cup winners, are left to a boring paddock life with only the flies for company. But they never lose character nor the ability to provoke wonderful memories.

Take, for instance, Rogan Josh, successful in the 1999 Melbourne Cup. 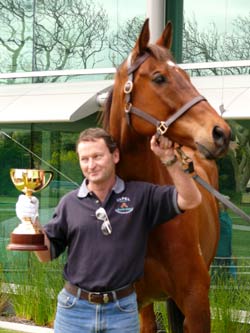 “I made a deal with myself that if the horse won the Cup I would name my baby boy after Rogan Josh,” one lady told Professor Andrew Clarke, who related this as one of many anecdotes surrounding Living Legends.

Like hundred of others she wanted to get up close and personal with her favourite horse at Woodlands, the historic Victorian property that now provides a retirement home named Living Legends for many of Australia’s best.

Living Legends, the outfit just out of Melbourne near Tullamarine, celebrated its first birthday last Wednesday.

Clarke is the CEO, veterinary director and dish-washing team member. Over the past 12 months, he has become attached to the great names of the Australian turf. Once you couldn’t find a category as redundant as a has-been nag, even the top-liners. However, Clarke confirmed, even after their racing days they have much to offer.

The idea came from the syndicate that raced dual Cox Plate winner Fields Of Omagh. Where do horses go to retire? Expressions of interest were sought by the Victorian Government regarding Woodlands, an historic racing establishment with a magnificent homestead. It goes back to the 1840s and was the venue for the first Victorian race meeting, a point-to-point.

Alas these days it isn’t real flash for agriculture but Clarke applied the Col Hayes theory: “If it grows trees it will grow horses.” And the property is littered with “fantastic old river redgums” and as many equine old-timers as it can hold.

Clarke worked on $200,000 in donations and voluntary labour to get the outfit to the stage where it could be self-sufficient, providing quality fencing with facilities safe for the horses and visitors. Going down the list of his star boarders he mentions Might And Power and Sky Heights, next paddock Brew and Doriemus, bottom paddock Rogan Josh, then Paris Lane and Bomber Bill, while nearby are Better Loosen Up and Fields Of Omagh, which are “absolute champions and true gentlemen”.

Silent Witness, the Australian-bred Hong Kong champion, sprints around the top paddock with Regal Roller. The speed may have dimmed but personality abounds.

“Might And Power is never happier than when he is with kids,” Clarke explained. “[His owner] Nick Moraitis says if handicapped people come and see him, he goes soporific, very soft. If he is at the races or a parade he wants to race, to get on with it. Like his owner, when there is business to be done it will be done but when kids are around he is totally different. He goes droopy.

“Sky Heights is called Barry Hall. He’s big, brash, good and knows it. Got great attitude. He’s friendly but some days he will walk straight over the top of you.

“Then we have Brew. He won a Melbourne Cup and failed police academy. Quite a few people come out and say, ‘Good onya, mate.’ Doriemus will do anything for carrot … Silent Witness is one of the most mentally tough horses I’ve come across. I flew with him from Hong Kong to Australia. He won 17 races straight and mental toughness was a vital factor.”

Unfortunately, Living Legends is doing it tough due to the equine influenza outbreak in NSW.

The gates were closed because, as Clarke explains, Woodland is so close to the airport. “Someone could leave Sydney at 9.30 am and by 11 am could be patting one of our horses.”

Also the retired stars were due to feature in the Melbourne Cup parade and other events over the spring carnival, adding up to sponsorship of more than $70,000 but now can’t be moved. “If you are operating on less than $250,000 you can imagine what that sort of hit does to you,” Clarke added.

Thus Living Legends is looking for a major naming rights sponsor for $350,000 a year for three years that would allow extra infrastructure improvements, more paddocks and better services for people. Particularly for schoolchildren.

The late John Ilhan, of Crazy John’s, had been approached and was interested more in the community aspect of Living Legends.

“As it got going we followed a group that started a work-for-the-dole program at Kangan TAFE,” Clarke pointed out. “Well over 20 came to us. We couldn’t be more proud of what they did, everything from woodwork to gardening, and catering. They embraced the whole concept, bringing their families on weekends to show what they had done.

“Other groups involved are diversional therapies, basically working with people with dementia. These people come out and are exposed to the environment. They have a great day at the homestead and with the horses.

“We have had hundreds of schoolkids but it’s the tip of the iceberg. We haven’t pushed the button on our schools program that has huge potential. They can see kangaroos in the wild, see and talk about the horses …”

Which also attracts the case-hardened punters who still get a kick out of renewing associations with a horse which did them a good turn.

“Like the one who came to see Better Loosen Up,” Clark said “He backed him at 12-1 and again next start and he got up again at a better price. That was 15 years previous. He was reliving the moment.

“And what about the 82-year-old lady who had never patted a horse before. She was with Better Loosen Up and you could see the thrill in her eye.” 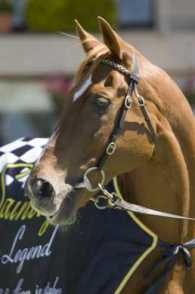 Due to EI (Equine Influenza), 1996 Melbourne Cup winner Saintly missed out this year but he usually does a stint at Living Legends over the Melbourne Cup carnival.

“Saintly is happy with his own company,” Clark pointed out. “Some days he will come over for a pat and not others. I noticed a lady who stayed around him for a long time. She was very emotional. She said, ‘He is a special horse. I lost one of my children. The anniversary of his death was Saintly’s Cup. The family backed him because he was the horse from heaven.”‘

Clarke still chokes up telling the story. Great horses can do that to you.

Find out more about Living Legends at http://www.livinglegends.org.au/about.html