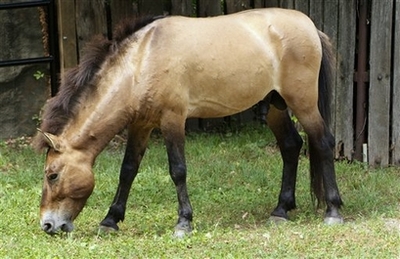 WASHINGTON – Scientists at the Smithsonian Institution’s National Zoo revealed Monday that they have reversed a vasectomy on an endangered horse to allow it to reproduce naturally — the first-known operation of its kind on an endangered species.

Veterinarians said the surgery was performed in October 2007 on a Przewalski horse named Minnesota, and they confirmed May 6 that the surgery was successful. The horses are native to China and Mongolia and were declared extinct in the wild in 1970. Since then several hundred have been bred and reintroduced to the wild in Asia.

In this photograph released by the Smithsonian’s National Zoo, zoo staff and a human urologist perform a reverse vasectomy on Minnesota, an endangered Przewalksi horse named ‘Minnesota,’ for the second time on Oct. 10, 2007 after the first attempt proved to be unsuccessful. Veterinarians placed Minnesota on his back for this procedure – a delicate task that limited the amount of time for the surgery, but allowed better access to the surgical site. Six months later, the Zoo’s veterinarians and reproductive scientists collected a semen sample from the horse that indicated the procedure had been a success. The ‘temporary vasectomy’ could have a significant impact on how animals are managed in captivity by giving zookeepers a way to control the animal’s offspring without having to neuter them.
—–

“This is kind of interesting turnaround,” said Dr. Sherman Silber, a St. Louis urologist who pioneered reversible vasectomies in 13,000 humans and helped with the horse surgery. “The human becomes the ‘test animal’… We’ve made so much progress because the human really is the perfect model.”

Luis Padilla, the zoo veterinarian who performed the reversal surgery in Washington, said the procedure was a first for this species and likely for any endangered species. A similar surgery was successfully performed while Padilla was a resident at the Saint Louis Zoo in 2003 on South American bush dogs, which resemble Chihuahuas. They are classified as vulnerable but not endangered.

The “temporary vasectomy” could have a significant impact on how animals are managed in captivity by giving zookeepers a new way to control the animal’s offspring without having to neuter them or use contraceptives that can change an animal’s behavior.

Minnesota, the 20-year-old horse, had a vasectomy in 1999 at his previous home at the Minnesota Zoo. A vasectomy may be performed on an endangered animal because of space constraints, the size of species or if an animal has already produced many offspring and its genes are overrepresented in the population, said Budhan Pukazhenthi, a reproductive scientist at the National Zoo’s Conservation and Research Center in Front Royal, Va.

Scientists later realized Minnesota was one of the most genetically valuable horses in the North American breeding program based on his ancestry. The Przewalski horse population is based on the genes from only 14 original animals. Zookeepers hope to find a suitable female for Minnesota in July.

The breakthrough “could have a very significant effect on how this species is preserved,” Padilla said.

Still, reversible vasectomies carry notable risks — from putting a horse to sleep for each operation to placing the horse on its back for the surgery.

Cheryl Asa, director of the American Zoo and Aquarium Association’s Wildlife Contraception Center, said the reversible vasectomy could be useful in isolated cases but probably won’t be adopted broadly.

[TH Comment: It is not stated why endangered horses are given vasectomies in the first place. The reversal procedure is highly risky for the horse, and TH supposes if he had died because of it the public would have heard nothing about it.]