A collection of acronyms to ponder:

Profiting From the Innocent – Zealots of Economic Rewards (PFIZER)

Q. The connection?
A. Horse organizations sponsored by Pfizer.

It seems that Pfizer’s support for horse slaughter as a humane alternative is not simply limited to its vested interest in the PMU industry and the need to justify the wastage that occurs within it.

In June of this year there was probing speculation as to Pfizer’s agenda behind the unabashed sponsorship of the live chat on “Unwanted Horses” aired immediately on the heels of the release of the long awaited GAO slaughter report. What explicitly placed the company under the microscope was that the call-in was hosted by Tom Lentz, Senior Director, Equine Veterinary Services, at Pfizer Animal Health.

More importantly Lenz an acknowledged slaughter proponent is former Chair of the AHC’s “Unwanted Horse Coalition” (UHC), past President of the American Association of Equine Practitioners (AAEP) and long-standing member of the American Veterinary Medical Association (AVMA), all pro-slaughter organizations.

Together, the combination of Pfizer and Lentz provokes confusion as to the sincerity in advocating for the “unwanted horse” dilemma that allegedly exists in NA according to some. How can a pro-horse slaughter disciple legitimately and propitiously advocate for the horse while at the same time the very company that employs this individual and supports the initiative is a major contributor to the problem?

In any case, Pfizer has always been at the centre of the slaughter debate through its continued sponsorship of pro-slaughter organizations. It has simply taken the meat industry lobbyist’s heated deliberations of re-opening the slaughter plants to “solve” the so-called “unwanted horse” impasse that has unlocked the flood gates to greater visibility.

Probably the most incriminating, yet irrefutably lucrative, of Pfizer’s strategies was its alliance with the undeniably pro-slaughter American Horse Council (AHC) in June of 2010. A powerful trade organization in Washington, DC representing the horse industry, the AHC lobbies before Congress and Federal Agencies to champion all aspects of the equine industry, including the “unwanted horse” dilemma and ultimately to promote their slaughter manifesto, albeit veiled in manipulative rhetoric.

What also came with this pact was The Unwanted Horse Coalition (UHC), a broad alliance of equine organizations that joined together under the AHC in 2006 and now operates under its auspices. The UHC mission statement is overwhelmingly misleading:

“The mission of the Unwanted Horse Coalition is to reduce the number of unwanted horses and to improve their welfare through education and the efforts of organizations committed to the health, safety, and responsible care and disposition of these horses.” [1]

Truth be told, the UHC was created in 2005 in response to the ever growing movement in the US that would see the horse slaughter plants close in 2007. Founders of the UHC cleverly coined the term “unwanted horse” as a devious contrivance to convince the public there are no viable alternatives to slaughter – control the terminology, control the outcome. In fact there are “excess” horses not “unwanted” horses as a direct result of over-breeding and the multi-million dollar commercial horse meat industry.

Pro-slaughter? Without a doubt.

What’s more, currently there are thirty-two (32) horse or horse-related organizations in the US that are members of the UHC and this number continues to grow. [2] Moreover, it is disturbing to think that some of these groups have elected to join in their dogma. In other words, if logic prevails, then all of these organizations are also pro-slaughter. Why else would such an affiliation exist?

Apart from Pfizer’s sponsorship of the AHC and other associations such as NAERIC (PMU industry) and the Equine Health and Welfare Council (EHWC) for example, there is also the UHC and its affiliates, at least 12 of which Pfizer currently sponsors for a number of different venues.

The question that begs asking is why the sponsorship of all of these pro-horse slaughter groups?

“Under the umbrella of the AHC and its affiliates Pfizer now benefits with the support of the most powerful equine organizations in North America. Although this will not remove the stigma of PMU farming and the cast-off foals of the industry, it nonetheless leverages their position in terms of horse slaughter and the “unwanted horse’ – a “humane” alternative by their standards.” [3]

a. Safety in numbers?
b. Acceptance in consequence of the status quo?
c. You scratch my back and I’ll scratch yours?
d. Morally responsible image?
e. Money?
f. All of the above. 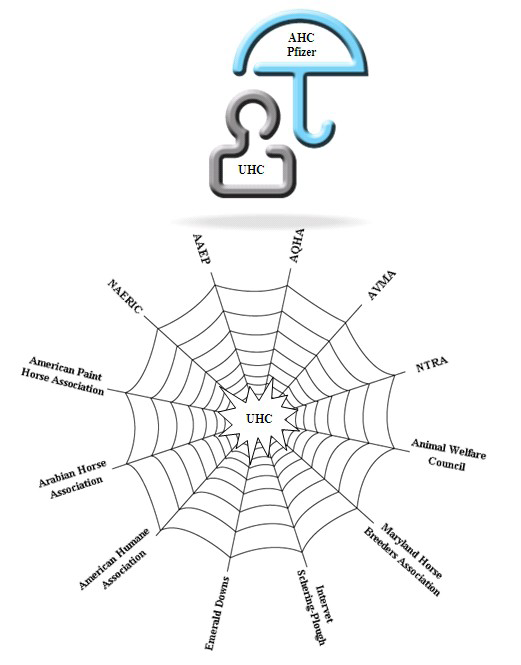 Whatever the reason(s), it is despicable in nature and betrays the fundamental bond between the horse and mankind. Truly a “Web of Evil.”

Recent news however has shed a new and interesting light on Pfizer’s strategy.

Officials with Pfizer announced yesterday that the company is seeking “strategic alternatives” for Pfizer Animal Health as well as its nutrition division, which manufactures infant formulas and other baby foods.

“Both Animal Health and Nutrition are strong businesses with attractive customer bases and solid fundamentals, but distinct enough from our core businesses that their value may be best maximized outside the company,” says Ian Read, Pfizer’s president and chief executive officer, in a press release. “In exploring these alternatives, we can determine what options will best drive their future growth opportunities and expansion, and enable shareholders to potentially realize higher value for these businesses.” [4]

The article goes on to say: “In 2010, Pfizer Animal Health brought in revenues of approximately $3.6 billion.” Not too shabby. This is over three and a half times the projected sales for Pfizer’s HRT therapies (Premarin®, Aprela®) of over one billion USD by 2015. Why don’t they unload this division instead? This alternative would auspiciously impact their reputation in regard to ending the insidious horror and suffering within the PMU industry from the perspective of both women and horses alike.

Nonetheless, the question then remains. Is this in some twisted way related to the horse industry? Will it have any impact on the plight of horses in North America and elsewhere in the world? It certainly seems like a lucrative division to relinquish. Only time will tell.
———-
[1] http://www.unwantedhorsecoalition.org/

4 thoughts on “Sponsoring Horse Slaughter: Pfizer – The Company That Keeps on Giving”