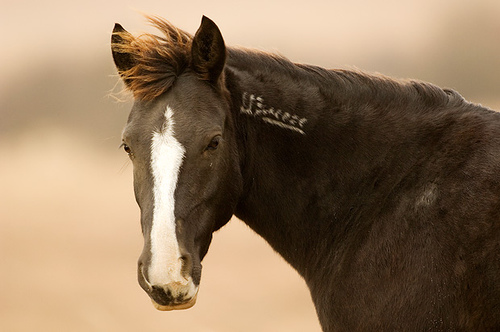 With 45,000 or so wild horses in federal control, the Bureau of Land Management selects a “pro-slaughter cattlewoman” to be the public’s voice on its advisory board.

ANDREW COHEN writes another excellent in depth article on the destruction of America’s wild horses and the lethal bureaucracy that dogs their every step. As things stand, it appears there is nothing or no one to stop it.

Advocates, fighting for years to preserve the US’s wild horses and burros, have tried every avenue they can think of, yet their cruel decimation continues at an alarming rate. The Obama Administration surely must have the worst scorecard of them all.

In his article, Cohen states:

So what is America going to do with all the wild horses it has rounded up to keep America’s public lands available for cattle and sheep? How is the BLM going to continue to justify the continuing costs of keeping the horses penned or pastured? The concern, for wild horse lovers, isn’t just that no one in Washington seems to have a good answer to those questions. The concern is that when the answers finally do come from government they’ll come from folks like Hendrickson, who evidently believe that large-scale slaughter is a valid option.

There is no conspiracy, the BLM’s Gorey says, but there doesn’t have to be one to doom the horses. You get enough like-minded people into a bureaucracy, or onto an advisory board, and pretty soon everyone agrees about what ought to be done. The answers come easier not because they are wiser, or because they purport to follow the spirit of the law, but because of the absence of any meaningful dissent or discussion about alternatives. That’s how bad policy gets made, how it sustains itself, and how, eventually, it becomes a self-fulfilling prophecy.

Much has been said, and much is being said, about the plight of America’s wild horses.

Whether you are new to the issue, or have been away from it for awhile, if you read little else, we urge you to read Mr. Cohen’s article in its entirety.

Andrew Cohen is a contributing editor at The Atlantic and legal analyst for 60 Minutes. He is also chief analyst and legal editor for CBS Radio News and has won a Murrow Award as one of the nation’s leading legal analysts and commentators.