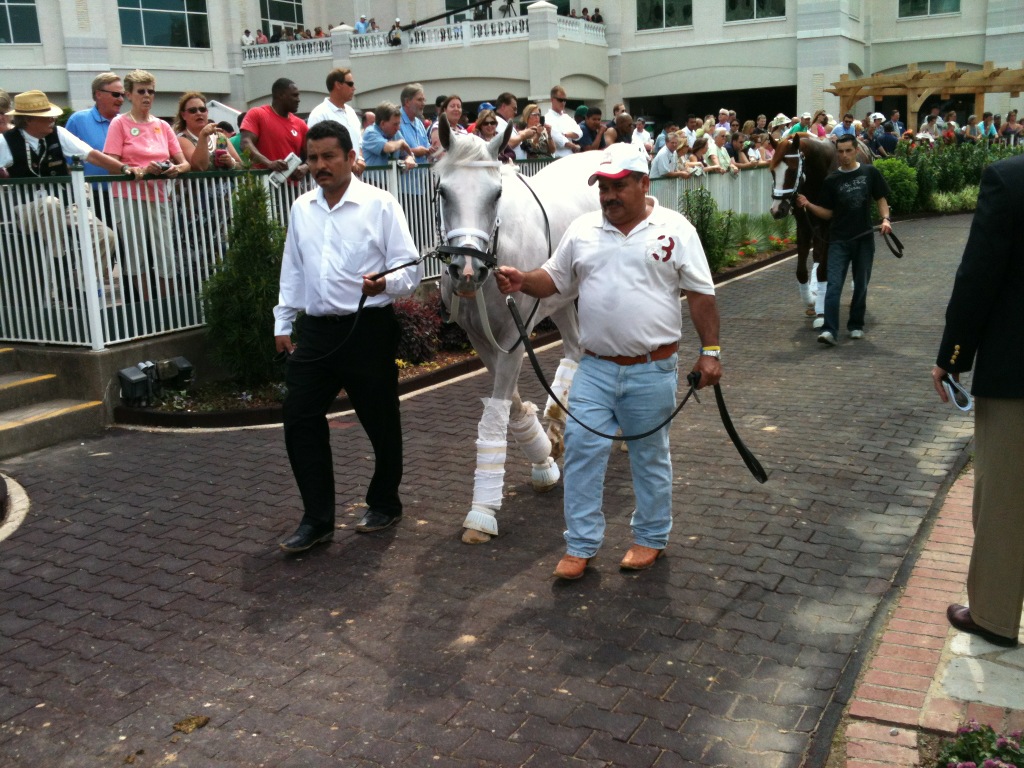 From an article written by FRANK DEFORD for Sports Illustrated, May 2, 2012:

The two-year-old champion colt named Hansen will not be the favorite in the Kentucky Derby on May 5, but most eyes will unavoidably be upon him.

You see, in a field of chestnuts and bays, Hansen is a brilliant white. Well, technically he’s a gray, but without boring you with equine pigmentation detail, thoroughbred grays, like the great Native Dancer, turn whiter as they grow older, and Hansen is simply prematurely white — sort of a four-legged Steve Martin. To emphasize the alabaster, his owner wanted to dye his tail blue for the Blue Grass Stakes, but the stick-in-the-mud racing officials thought that was tacky.

But as rare as white horses are — less than eight percent — it is amazing how they’ve fascinated virtually every culture. White horses are chosen to stand for good … and for bad. One of the four horsemen of the Apolocalpyse rides a pale horse, but the unicorn — which is invariably depicted as white — stands for purity. Only virgins can capture unicorns. But contrariwise, in some cultures white horses represent fertility. Take your pick.

But white horses stand for power and glory, too. In the book of Revelation, not only Jesus, but all the armies of heaven will descend astride white horses. In politics, “the man on the white horse” invariably refers to the leader who is going to save us. When Peale and Trumbull famously painted George Washington with a horse, the father of our country’s steed is white. For the Confederacy, Robert E. Lee’s famous mount, Traveler, really was a white horse.

4 thoughts on “White horses captivate us; all eyes on Kentucky Derby entry Hansen”