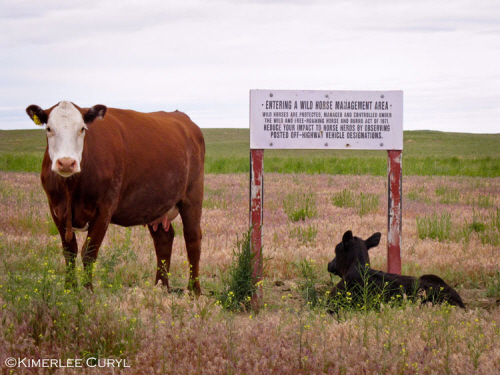 We thought this would be of interest to wild horses advocates. It demonstrates the BLM’s true agenda and the lengths they go to achieve it. Wildlife are rarely preserved for preservation sake in US. Wildlife are typically preserved for hunters to kill because of the lucre that comes from high-priced hunting permits. Thankfully our wild horses and burros do not have that worry. They are made instead to give way for cattle to feed America’s lust for beef. Burgers win; Mustangs lose.

Written by PHILIP A. JANQUART

BOISE, Idaho (CN) – The Bureau of Land Management secretly awarded grazing rights to one of Idaho’s largest companies, amid an ongoing lawsuit that challenges the BLM’s environmental reviews of thousands of acres of Idaho land, the Western Watershed Project claims in Federal Court.

“This case is a companion to W. Watersheds Project v. Salazar, Case No. 08-435-BLM (D. Idaho) (‘Salazar‘), an ongoing lawsuit challenging BLM’s grazing decisions and associated environmental reviews on the Battle Creek and other allotments in the Bruneau, Owyhee and Burley Field Offices in southern Idaho,” the complaint states.

The environmental group claims the permitting violated the National Environmental Policy Act, the Federal Land Policy and Management Act and the Fundamentals of Rangeland Health, a set of regulations developed in 1995.

“Through these decisions and permits, BLM has systematically ignored the adverse impacts that livestock grazing is having on the Greater sage-grouse populations and habitat, as well as on the fragile native vegetation communities and high desert ecosystem.” the complaint states.

“Instead, BLM has hidden its grazing preference transfers and grazing authorizations from the public, and has permitted grazing without any examination of the ecological costs of livestock grazing at inappropriate times, at inappropriate levels and under inappropriate terms and conditions in violation of NEPA, FLPMA and the Fundamentals.”

The Battle Creek allotment includes more than 145,000 acres of BLM-administered public land and more than 20,000 acres of state and private lands, extending southwest almost 35 miles into the Owyhee Mountains and averaging nearly 12 miles wide. There are about 30 miles of streams in the allotment, including Battle Creek, Little Jacks Creek and Shoofly Creek, and 18 upland seeps, springs and wet meadows. More than 64,000 acres are considered sage grouse habitat.

Western Watersheds wants the grazing permits annulled, but a court order forcing the BLM to do an appropriate environmental analysis as required by law.

“Before transferring the grazing preference from Bruneau Cattle Company to Simplot, BLM refused to prepare an environmental assessment or environmental impact statement,” the group claims.

Instead, Western Watersheds says, the BLM issued a “Categorical Exclusion,” claiming extraordinary circumstances, and prepared two documents – which were held by the court in Salazar to be unlawful – that gave Simplot the right to graze cattle in the Battle Creek allotment.

“BLM misapplied its own 11-step test for determining the existence of ‘Extraordinary Circumstances,'” the complaint states. It claims the BLM “failed to examine the highly uncertain and potentially significant environmental effect of permitting grazing on Battle Creek allotment, especially in light of the collapse of sage grouse populations and degradation of sage grouse habitat.”

Western Watersheds is represented by Todd Tucci, and by Natalie Havlina, with Advocates for the West.