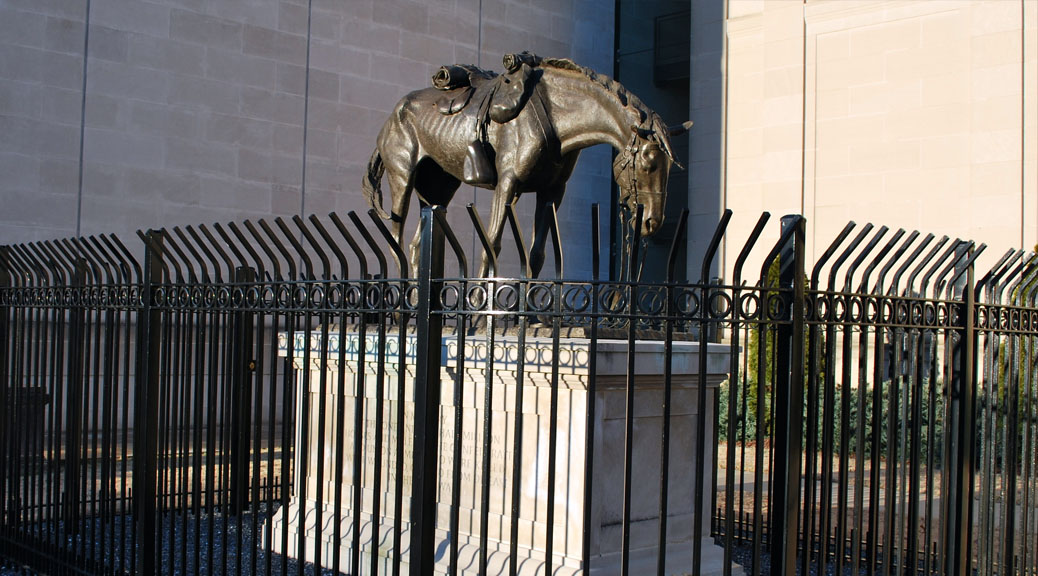 There was a real-life model for the horse in the Steven Spielberg film “War Horse.”

EILEEN BATTERSBY in a brilliant article for the Irish Times, writes:

His name was Warrior, and he went to war in 1914 with his owner, a British general named Jack Seely. Both survived, defying even the horrors of the Somme. Warrior was celebrated as a hero and died in 1941, in the middle of another war, a few weeks short of his 33rd birthday. Although revered, he was not buried with the expected pomp and ceremony. Instead his body was donated to the war effort and used for meat.

More then 5,000 years have passed since man first began riding horses. For much of that time the animal, now mostly associated with sport, was involved in war and military campaigns.

Archaeological evidence confirms that the use of a bit began somewhere in what is now Russia. The invention of the wheel led to the introduction of the chariot, a vehicle that carried two men, one controlling the horse that pulled it, the other, an archer, fighting from a moving platform.

Although nervous by nature, the horse made warfare faster. A mounted warrior had a huge advantage, giving riders the element of surprise. Horses also helped in reconnaissance and in making swift getaways after attacking settlements under siege. Through sheer size and an ability to kick and trample, the animals also intimidated anyone on the ground. Greek armies made use of horses, and the first manual on horsemanship was written by a cavalry officer, Xenophon.

Trench warfare, gas attacks, barbed wire, machine guns and, from 1917 onwards, tanks would change the nature of war, but not before eight million horses, donkeys and mules had died.

What about equines who were used in battle in the US alone?

A variety of sources reveal the number of horses killed in certain battles, but there is no comprehensive figure, so we are still digging.

What we noticed during our research, however, is that tens of thousands of horses were killed not only in battle as infantry horses but also on farms, for the same reason the enemy destroys houses, barns, food supplies and ammunition.

While the number of men who died in the Civil War is estimated at around 640,00, more than twice that number, or a million and a half horses and mules, died during the same period. Source.

Even taking into consideration the number of equine casualties in the Revolutionary and Civil Wars, the death toll is of course higher. That number does not include the horses who died in other battles fought on American soil.

We remember and honor them all.

7 thoughts on “War horses: Remembering the millions who fought and died in human battles”