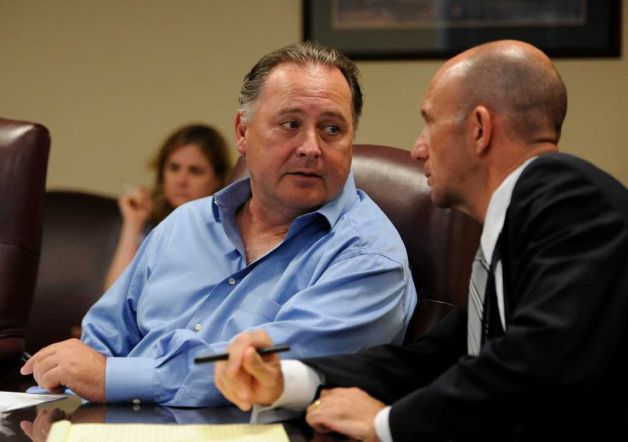 I don’t know what I am more worn out with, reporting on medication violations in American horse racing or the industry’s failure to prosecute violators.

The trainer in question today thankfully is not Doug O’Neill. Instead the drug-induced public glare is focused on Big Brown trainer, Rick Dutrow. O’Neill must be relieved for it to shift over to Dutrow for awhile.

A New York appeals court has unanimously upheld the revocation of trainer Rick Dutrow’s license by state racing regulators—a major setback for the colorful trainer’s ability to keep working in the state.

Just a day before the opening of the Saratoga summer meet, the Appellate Division of the New York State Supreme Court said July 19 the state Racing and Wagering Board’s revocation of Dutrow’s license was legally justified and based on a claim that he had “engaged in conduct that was improper and inconsistent with the public interest and the best interests of racing.”

That’s great I guess, but it is by no means certain to stick, as Dutrow has one last avenue for appeal and taking it will mean he can saddle runners at the upcoming meet at Saratoga. Sigh.

Sources said the stay Dutrow obtained last year from a lower state court to delay his revocation period remains in effect until the Court of Appeals decides, or not, to hear his case. That means Dutrow likely, for the immediate time being, can still train horses for the Saratoga Racecourse meet.

Get the full story on Dutrow here >>

Dutrow’s stay of suspension is the same type that allowed O’Neill to saddle I’ll Have Another in the Preakness during the race for the Triple Crown. Not that this matters a whole lot. Trainers serving suspensions get their assistants to do the work while communicating their orders from behind the scenes.

But how about this guy? Because of all the media hoopla surrounding O’Neill’s horse doping history when I’ll Have Another won the Kentucky Derby and Preakness, the Lou Pena suspension got little attention.

A Standardbred trainer was suspended in New York May 24 for an alleged 1,700 equine medication violations after a joint investigation by New York and New Jersey regulators.

Lou Pena, one of harness racing’s most successful trainers by wins for the past several years, faces a hearing on the charges. The New York State Racing and Wagering Board said Pena “amassed a total of 1,719 equine drug violations in 675 races between January 2010 and April 2012.”

And look at the list of drugs in question:

The drugs Pena is alleged to have used in his horses are adrenocorticotropic acid, levothyroxine, and gonadorelin, which are hormones; betamethasone and flumethasone, which are steroids; clenbuterol, which aids breathing; cromolyn sodium and fircoxib, both non-steroidal anti-inflammatory drugs; glycopyrrolate, known as Robinul; methocarbamol, known as Robaxin; and magnesium sulfate.

I knew I should have paid more attention in Chemistry class.

But how about this? That list does not include “substances being found in regulatory drug tests”. As stated, the drug infractions reported on were discovered instead through a joint investigative collaboration between New York and New Jersey racing authorities.

Get the rest of the story on Pena here >>

That, however, is not the end of the Pena story. Wait till you see what HarnessLink reported:

Five of the best harness racing trainers in the United States have told Harnesslink how they feel about the suspension and the over-all affect it could have on harness racing livelihoods.

They all believed they had to be even more thorough with their daily routines. New Jersey trainer Kelvin Harrison believed the NYSRWB had set a strong precedent with the Pena charges and now anyone was fair game.

“No-one is safe. If the officials want to get you they will get you. Lou has never been proven guilty. He’s winning and they can’t work out why. There’s no crime been committed here.

“Until there is one this whole case should be put to bed. Either produce the evidence or let the guy earn his living,” Chesterfield-based Harrison said.

While I do not agree with these trainers, I do agree with Teresa Genaro, author of Brooklyn Backstretch who says that Dutrow should not be singled out.

But this is not happening. Horse racing’s lack of enforcement regarding medication violations is a huge fail all year round, at every level. The behavior of trainers like Dutrow, O’Neill and Pena only get important media attention when a big headline can be made.

Why do we bother covering this so much?

For many reasons, but among the most important that impact the horses are:

1. Side effects of prolonged use.
2. Pain-masking drugs compounding pre-existing injuries.
3. Breakdowns and death.
4. Rehabilitation and recovery time after racing (if they survive it all) hindering and sometimes eliminating their chances at a second career and life.

And that’s just for starters.

Bear in mind this issue is not simply about medication violations for the use of illegal drugs. Equine athletes in the US are drugged virtually their entire careers with a laundry list of “accepted” drugs, beginning in the shed and continuing throughout their training and racing lives.