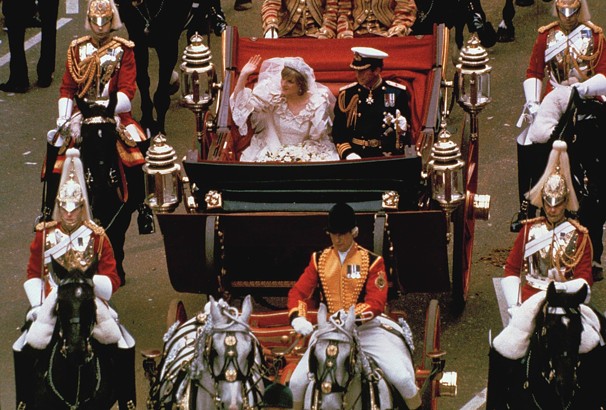 (Aug. 28, 2007) — Horses are key figures in the pomp and circumstance that surrounds royal events in Great Britain, and have always been central to British royal life.

Horses were therefore quite naturally a big part of Diana’s life as Princess of Wales, from the handsome greys who delivered her to and from St. Paul’s for her wedding, to the beautiful bays who drew her carriage around the racecourse at Royal Ascot.

10 years ago on September 6, 1997, horses of the King’s Troop were called on to carry out a final and solemn royal duty, conducting Princess Diana’s casket from Kensington Palace to Westminster Abbey for her funeral. London’s Metropolitan Police Mounted Branch also accompanied the cortege.

According to the Associated Press, the day before Diana’s funeral, soldiers screamed and hurled newspapers at the six gleaming bay horses assigned to pull the gun carriage bearing her coffin, to ensure they could remain calm.

“Obviously, they didn’t like it, but certainly in training they did not react and kept going,” said Maj. Keith Brooks, commander of the King’s Troop. “We have been training [them] for all contingencies, such as people jumping over barriers or throwing items such as flowers at the carriage.”

On the day of Diana’s funeral, an estimated two million mourners lined the route and two and a half billion viewed the procession worldwide on television.

The only sound was the clatter of horses’ hooves and the peal of a church bell.

Growing up on a country estate, Diana developed an affinity with animals, and loved her childhood pony. However, when Princess Diana came to the royal family, she was not a keen rider, something she shared with only one other member of the royal family, the Queen’s sister, Princess Margaret. A teenage mishap with a horse had put Diana off having anything to do with horseback riding.

Knowing how important learning to ride was for her boys, it was Diana — not her polo player husband Prince Charles — who made sure Princes William and Harry received instruction at an early age. Their teacher was Capt. James Hewitt. Hewitt eventually coaxed a hesitant Diana to take lessons as well, to build her confidence, and she became a capable rider.

According to Hewitt, one of Diana’s greatest pleasure was learning to be genuinely comfortable around horses for the first time in her life. She found she liked visiting the stables simply to enjoy their company. The Princess commented there was something about horses that was “quite profound.”

The presence of horses was quite profound on the day of Diana’s funeral.

The only sound was the clatter of horses’ hooves and the peal of a church bell.
—
Vivian Grant Farrell is the founding President of the Int’l Fund for Horses, and a native Brit.

3 thoughts on “Princess Diana: In the company of horses”