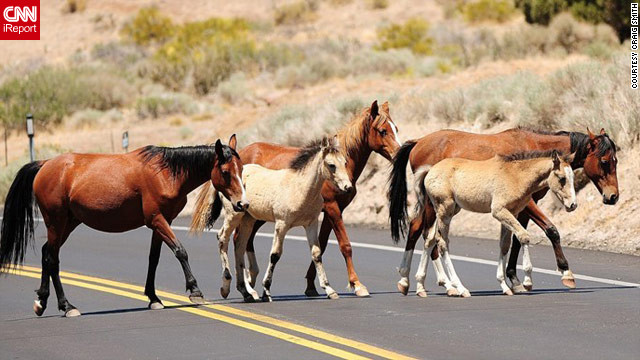 The controversy over wild horses in Nevada is heating up again. A group of about two dozen organized a demonstration in front of the Capital in Carson City on Friday.

And earlier this week an emotionally charged confrontation between a private landowner and a wild horse advocate took place in south Reno. It was later posted on YouTube (see below).

An unidentified woman charged at the camera protesting that horses were being trapped and moved rather than simply fenced out. The landowner caught it on his cell phone and launched it on YouTube.

“This is a fence out state!,” insists Tonia Tavcar. “If landowners don’t want horses on their land they don’t have to trap them and send them to slaughter, they can just fence them out!”

“It seems logical, I admit,” says Ed Foster, Public Information Officer with the State Department of Agriculture. “But we are charged with responding to complaints when stray animals, including horses, are a nuisance and doing something about it. But we don’t have the authority to make a landowner put up a fence!”

Foster adds the drought is fueling problems as more horses search for food and water. And he says for a while they did sell horses back to the advocates at a very low price. That he says, seemed to work until those same horses resurfaced on the range and were picked up again.

It’s all resulted in a lawsuit filed Friday, by the State of Nevada against the advocates for releasing the animals.

The lawsuit names advocate Willis Lamm. It charges the ‘Let ‘em Run Foundation’ with failure to brand or mark their animals, abandoning an animal and allowing an animal to be injured or deprived of food and water – all misdemeanor charges.