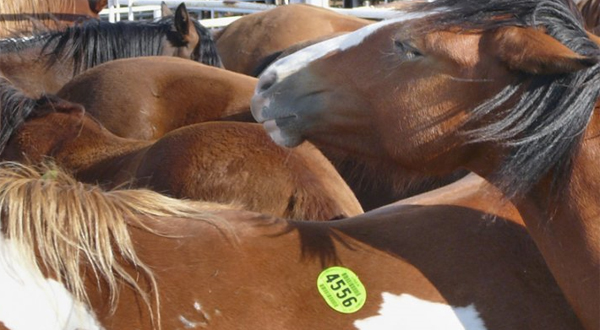 “Once wide open to virtually any industry that promised payrolls and jobs, the eastern Oregon town of Hermiston is taking a stand against the latest business poised to land on its doorstep.”

I don’t think the first thing you want to see when you get off the freeway is a horse slaughter plant,” said Mayor Robert E. Severson.

We are the fastest-growing community in eastern Oregon. I’ve had people come up to me and say, “Thank God that you took a stand against the horse slaughter plant.”

Dave Duquette and Sue Wallis, operating in this instance under the name United Horsemen’s Association (UHA), are behind returning horse slaughter to U.S. soil in Oregon. Duquette speaking on behalf of the horse slaughter group states that it hopes to have a “20,000-square-foot plant in place by late 2013. Investors have bought 252 acres near the junction of Interstate 84/Interstate 82 for the operation.”

Additionally, Duquette says the organization plans “a nonprofit horse rehabilitation center managed by the 22,000-member United Horsemen’s Association in conjunction with the plant. It would rescue, train and find homes for horses salvaged from the slaughter stream”.

If you believe that, you will believe anything.

Horse slaughter plants ideally want only the youngest and meatiest horses, not the cast-offs from the likes of Duquette and Wallis who show no talent for selecting horses for meat. To prove the point, witness this statement by Duquette:

“We are going to try to reproduce this facility in several places in the United States,” said Duquette, who believes the rescue center could be “a role model for the nation.” Horses for slaughter would include old, lame and problem domestic horses as well as unwanted wild horses from herds roaming Indian reservations.

Based on that statement one wonders if UHA have ideas of working in tandem with the BLM who were recently exposed for selling wild horses to a known Colorado horse trader. Or is Duquette’s group going to continue exploiting willing Indian reservations in securing wild horses for European dinner plates?

Standing on their decision to disallow horse slaughter to come to Hermiston, the Mayor and Hermiston City Council have refused to talk to Duquette about the project.

It seems that UHA through Duquette are encouraging investment in projects that have little to no hope of ever yielding a return, as federal inspections of horse meat necessary to export it to Europe for human consumption is never likely to be funded by the U.S. government again.

The Mayor, who is also concerned that other businesses may choose not to locate in his fast-growing community if horse slaughter sets up shop there, is right in taking and keeping a firm stand against it.