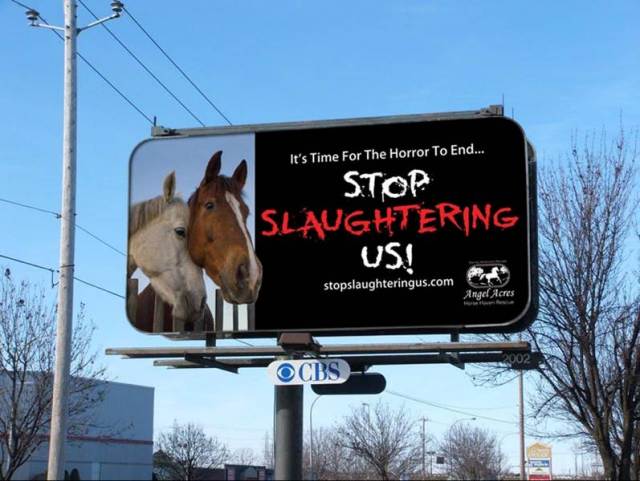 Port Coquitlam, B.C. (Nov. 7, 2012) — “Stop Slaughtering Us” is the slogan on a billboard that has appeared in both Ottawa and Calgary earlier this year. Now the billboard’s message is attracting the attention of motorists and passersby in Port Coquitlam, B.C., on busy Lougheed Highway.

The Canadian Horse Defence Coalition (CHDC) congratulates U.S.-based horse advocacy organization, Angel Acres, on a powerful campaign that has resulted in billboards being launched in both the United States and Canada. Well over 60% of horses killed at each of Canada’s four equine slaughter plants originate from the U.S. and have been shipped across the border for slaughter.

The billboard’s message is aimed at stopping the mass butchering of horses for human consumption. Last year almost 90,000 horses died in Canadian slaughter plants, in spite of overwhelming evidence that the practice of horse slaughter violates both animal welfare and food safety principles.

Charlotte Uhrich, billboard sponsor states, “We are pleased to put this anti-horse-slaughter billboard up in support of NDP MP Alex Atamanenko and his Bill C-322, an Act to end horse slaughter in Canada. Horse slaughter is inhumane and we do not slaughter and eat our companion animals in Canada. The closet door has been opened to Canada’s dirty little secret and it is time to end this evil practice.”

A massive collaborative effort on both sides of the border has resulted in a campaign that seeks to inform citizens in both Canada and the U.S. that this archaic business still exists – despite citizen protests and undercover footage that reveals, time and time again, the cruelty of slaughtering an intelligent “flight” animal such as the horse.

“The campaign to end horse slaughter recognizes no borders,” states Sinikka Crosland, Executive Director of the CHDC. “Most U.S. citizens are adamantly opposed to the slaughter of horses for human consumption, as are many Canadians. Horses are our companions and working partners – not food for overseas diners. Many have received drugs in their lifetimes that are not permitted to enter the food chain.”

The CHDC calls upon the Canadian government to pay heed to the concerns of the majority of citizens in both Canada and the U.S., and to end the slaughter of horses on Canadian soil without delay.

3 thoughts on “Stop Slaughtering Us billboard for horses hits B.C.”