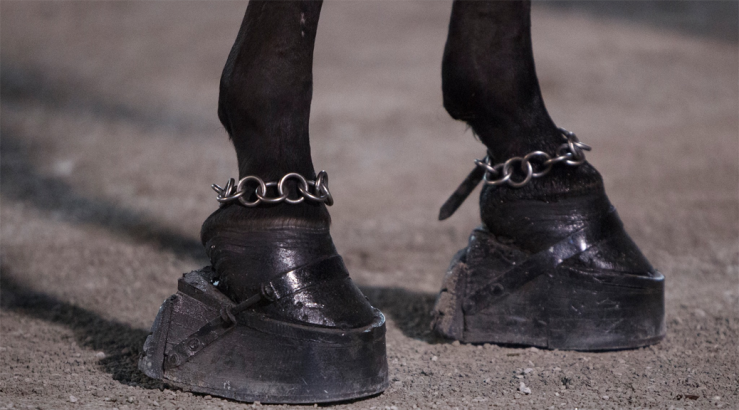 WASHINGTON – The man who led passage of the first law regulating horse soring 44 years ago blamed Kentucky and Tennessee lawmakers on Wednesday for blocking a new bill to shore up that act.

Former Sen. Joseph Tydings, D-Md., the lead sponsor of the 1970 Horse Protection Act, said “one very powerful senator from Kentucky” was blocking the Prevent All Soring Tactics (PAST) Act from coming to a vote in the Senate.

Tydings made his remark, a clear reference to Senate Minority Leader Mitch McConnell, R-Ky., while addressing a rally of about 75 walking horse enthusiasts and animal rights activists in front of the Capitol Reflecting Pool.

McConnell is co-sponsoring alternative legislation introduced by Tennessee Republican Sen. Lamar Alexander. But groups such as the Humane Society of the United States criticize Alexander’s bill for allowing the industry to continue to regulate itself.

Dan Cramer of Clarksville, a Democrat running for Blackburn’s 7th Congressional District seat, attended the rally and also blamed her.

“She’s been telling her fellow lawmakers that the PAST Act will never leave committee,” Cramer said.

Horse soring is doing more than expose Tennessee Walking Horses to torture and blistering cruelty — it is crippling the industry.

We hope the blinkered Ms Blackburn is blamed for that when the Big Lick and its related gaited horse shows finally founders and dies and the State of Tennessee suffers more damage to its reputation and a major loss of revenues.

Insofar as McConnell, he is no friend to horses. He has insinuated himself into this issue as well as other horse welfare issues including allegedly putting secret holds on a number of bills banning slaughter during his time in office over the years.

As we see it McConnell has done nothing of merit for the Commonwealth of Kentucky and its equine industry.

Why does McConnell do it? “Must be the money“.

Both Kentucky Senators, Paul and McConnell, oppose the PAST Act.

• Horse industry ponies up for political campaigns, May 13, 2012