In July of 2013 the pharmaceutical company Bayer petitioned the FDA’s policy for “New Chemical Entity” (NCE) exclusivity in regard to fixed-dosed combination drugs (FCD), consisting of at least one new drug product, to be eligible for five years.

Under the guidelines at the time fixed-dose drug combinations containing a drug entity that was already approved were ineligible for the 5-year exclusivity rights.

The development of pharmaceuticals is time-consuming, expensive and inherently uncertain in terms of the outcome and eligibility to market as granted by FDA approval. Moreover patents for novel therapies are typically obtained long before the products are endorsed by the FDA such that the effective patent term is significantly reduced, or in the worst case has expired, prior to the drug’s approval for marketing.

Note that ANDA is an acronym for Abbreviated New Drug Application and applies specifically to generics. [1]

Both the FDA and its European counterpart (EMEA) have implemented several exclusivity strategies to lengthen the interval during which pharmaceutical companies can market their drugs without competition from incoming generics resulting in significant financial benefits for the original drug manufacturer. The primary goals of these exclusivity incentives are to foster continued innovation in the development of novel drugs as well as aid in bringing generics to the market more quickly.

“The Drug Competition and Patent Term Restoration Act, or the Hatch-Waxman Act, passed in 1984, provides up to five years market exclusivity to companies introducing a new chemical entity to the market (NCE Exclusivity) and up to three years’ market exclusivity for conducting clinical trials to support changes to products already on the market (Clinical Investigation or CI Exclusivity).” [2]

In translation this means that any combination drug that has a component that has already been approved by the FDA is not eligible for the 5-year exclusivity rights – only the 3-year extension which applies to a modification of an approved drug. This would include such drugs as Duavee where the Premarin component, containing conjugated equine estrogens (CEEs), received FDA approval many years ago. The new component, or “chemical entity”, and yet to be approved as a stand-alone drug, is the selective estrogen-receptor modulator (SERM) bazedoxifene.

Following the Bayer petition in July of 2013, both Gilead Sciences and Ferring Pharmaceuticals also filed Citizen Petitions requesting that the agency recognize a period of 5-year New Chemical Entity (NCE) exclusivity for selected Fixed-Dose Combination Drugs (“FDCs”). In response the FDA announced in February 2014 that they did plan to change the interpretation of the FDC Act’s NCE exclusivity to include newly approved FDCs containing a NCE and a previously approved drug. Subsequently a guidance document was issued that month.

The caveat was that the new rule would not be retroactive and was upheld by the FDA from the beginning. Consequently the FDA denied all of three companies’ petitions saying that the new guidelines would not apply to them and that they would be stuck with the 3-year exclusivity. Gilead and Ferring immediately submitted petitions for the FDA to reconsider.

After the fact, along came Pfizer with a petition (May 30, 2014) for their combination drug Duavee which was formally approved by the FDA on October 3, 2013 for use in women with a uterus for treatment of moderate to severe vasomotor symptoms associated with menopause and for prevention of postmenopausal osteoporosis. [3]

The petition cited the same grievance maintained as Bayer and the other companies asking for a 5-year exclusivity period, rather than the 3-year for which Duavee was eligible. Pfizer’s claim was that the FDA erred in its decision not to grant the extra 2 years of exclusivity when it approved Duavee in October 2013.

In a setback for companies with existing FDAs (e.g. Pfizer’s Duavee), the agency sustained their position and confirmed that the policy would not be applied retroactively, only from the date of the guidance’s publication and not to any drugs approved prior to October 10, 2014 – the petitions submitted by Gilead, Ferring and Pfizer for their HIV pill Stribild, colonoscopy prep Prepopik and Duavee respectively were immediately denied.

It is likely that some drug makers who are affected by this decision will be headed to court in the near future to appeal the decision or at least to challenge the FDA’s cutoff date.

As much as it is reassuring that Pfizer’s bid has been denied, the big question looms as to why Pfizer is fighting for the extra 2-year exclusivity.

Currently there is no indication that an Abbreviated New Drug Application (ANDA) has been submitted for Duavee to serve as a competitive generic. Moreover there is no generic version of conjugated equine estrogens (CEEs) which comprise the drug Premarin.

“Way back in May 1997, FDA ruled in the context of PREMARIN (conjugated estrogens) Tablets, that because PREMARIN ‘is not adequately characterized at this time, the active ingredients of Premarin cannot now be definitively identified,’ and that ‘[u]ntil the active ingredients are sufficiently defined, a synthetic generic version of Premarin cannot be approved.’ Instead, companies have generally pursued approval of 505(b)(2) NDAs – e.g., CENESTIN (synthetic conjugated estrogens,A) Tablets.” [5]

Is it conceivable that the FDA will entertain the approval of an ANDA for conjugated equine estrogens?

In other words, the active ingredients in the myriad components that make up the whole of the product cannot be clearly defined and it is unknown what components make a clinically meaningful contribution to its overall effects. The only feasible candidates for an ANDA would be those derived from the same natural source – pregnant mares’ urine.

In fact the FDA’s ANDA Paragraph IV list indicates a single undated entry for Premarin (other sources cite the date as sometime prior to March 2004) and three for Cenestin (Synethetic A conjugated estrogens) from 2008 and 2009, none of which has been approved after all of these years. [7]

This returns us to the question of why Pfizer is fighting for the extra 2 years of exclusivity for Duavee and the obvious significance of bazedoxifene in the combination drug.

Currently a stand-alone version of bazedoxifene has not been approved in the U.S. by the FDA due to increased incidents of stroke and deep vein thrombosis. It is however approved in other countries around the globe (e.g. Spain, Japan) under the trade name Viviant.

Perhaps their strategy in seeking the extended NCE for Duavee is complementary to obtaining a long sought after approval of bazedoxifene and a 5-year exclusivity for that particular drug. Or perhaps Pfizer knows something that has yet to surface. Time will tell.

In any case, on October 27, 2014 the combination conjugated equine estrogen/bazedoxifene venom, to be sold under the name of Duavive, was recommended for approval by the European Medicines Agency (EMA) so there is little doubt that it will soon be available to market to the unsuspecting souls willing to subject themselves to this medication.

The announcement also reminds the audience of the pesky black box warnings that Duavee carries with it in the Unites States.

“The warning also notes that Duavee brings with it an increased risk for endometrial cancer in women with a uterus who use unopposed estrogens.

Also included in the black box warning is a reminder that estrogen therapy should not be used to prevent cardiovascular disease or dementia. In addition, the prescription insert warns that the Women’s Health Initiative estrogen-alone study reported an increased risk for stroke as well as an increased risk for deep vein thrombosis.” [8]

Regardless of the potential risks that come with Duavee, Pfizer and Ligand Pharmaceuticals, the developer of the drug, continue to sharply focus on it in anticipation of its blockbuster potential.

“The drug launched six months ago and has now grown to more than 5000 prescriptions a month. Pfizer is launching a new direct to consumer campaign and has boosted its marketing efforts. National print advertisements for Duavee are appearing in Good Housekeeping, People, Redbook, Martha Stewart Living, and Better Homes. Kim Cattrall, star of Sex and the City is also leading a Duavee campaign called Tune into Menopause. Pfizer and Ligand also expect European approval within the coming weeks.” [9]

In the meantime, new drug studies continue to warn about the dire consequences of drugs manufactured from conjugated equine estrogens – whether in part or whole. A recent Canadian study conducted by the Canadian Cancer Society’s top epidemiologist alleges that popular menopause drugs made in part from estrogen found in the urine of pregnant horses have caused breast cancer in thousands of Canadian women.

“The body of evidence to date overwhelmingly points to a causal connection between the use of Premplus and the development of invasive breast cancer in women,” the society’s Prithwish De wrote in a report to be filed in a Canadian class-action lawsuit against drug manufacturer Wyeth Canada, now owned by Pfizer.” [10]

But the retort is always the same. Denial.

“In pleadings filed in response to the class action claims, Wyeth Canada (now a division of Pfizer) states that “Premarin and Premplus do not cause breast cancer.”

“The cause of breast cancer is not known. The vast majority of women who take hormone therapies such as Premarin and Premplus do not develop breast cancer, according to the pleadings filed by Wyeth Canada in a British Columbia court.” [11] 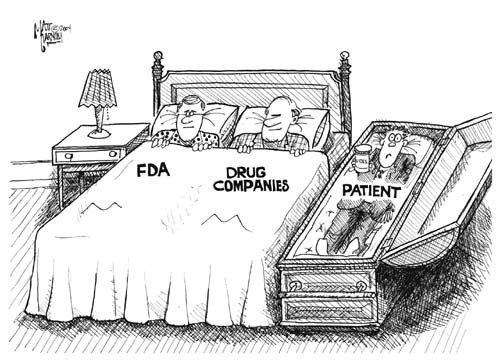 The entire “death by propaganda” situation is disheartening – pushing drugs and marketing diseases. In this case at the expense of both women and horses.

Big Pharma and its influence over the practice of medicine and patient care is frightening. The slick direct-to-consumer marketing targeting patients directly, together with the emotional branding by association, has led to a sharp increase in the sales of prescription drugs whether they are needed or not – disease mongering at its finest.

In the words of a former vice president of Pfizer:

• Learn more about Premarin horses, the women, the drugs and alternatives at our Premstoppers page.
http://www.horsefund.org/premstoppers-home.php

2 thoughts on “Pfizer fights for more protection for their new combo drug Duavee – But why?”