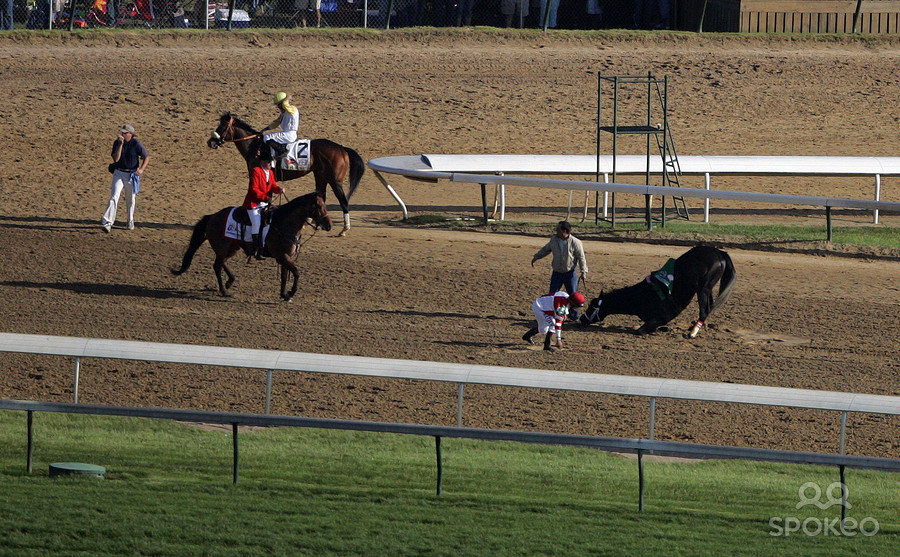 by PATRICK BATTUELO
Cross-posted with Permission from Horse Racing Wrongs

Last week, The Jockey Club gleefully boasted of progress on the “breakdown” front: “An analysis of data from the Equine Injury Database…has shown a 14 percent decrease in the frequency of fatal injury…from 1.89 per 1,000 starts in 2014 to 1.62 per 1,000 starts in 2015…the lowest since the EID started publishing…in 2009.”

To start, the wording is (intentionally, I have to believe) misleading: Presented as deaths per 1,000 starts, it reads, at least to the untrained eye, deaths per 1,000 horses. But the typical racehorse logs many starts (up to 25) each year, making the death rate per 1,000 horses much higher – certainly not one they’d want to publicize.

The database is completely voluntary: While many tracks participate, some do not. Besides that, no third party – not the JC, not a government agency, no one – verifies the submitted data. At the risk of stating the obvious, dead horses are bad for business. So, not only is there no compelling reason for tracks (trainers, owners, etc.) to give a complete reckoning, there is a vested interest to not. Self-reporting – an honor system – the casualties that they are directly responsible for? Please.

The database is anonymous: No names, no dates, (mostly) no locations. Not only does this make it impossible for someone like me to cross-confirm, it keeps the names and faces of the dead safely secreted away. Messy carcasses converted to sterile ratios.

The database has acknowledged restrictions: Only those who perish “as a direct result of injuries sustained participating in a race” are counted. In other words, the 3-year-old (an adolescent, by the way) who keels and dies of what is commonly dismissed as a “cardiac event” is excluded, not to mention all training deaths, which are at least as common as those occurring in-race. And, the death must come “within 72 hours of [the] race,” leaving the many who are euthanized back at the farm, post unsuccessful surgery, or after being acquired by a rescue unaccounted for. More hidden carnage.

In the end, The Jockey Club is American Thoroughbred racing, impossible to separate from the other interested parties. How can anything it says regarding the more unseemly aspects (dead horses) of its own industry be taken seriously?

Truth is, the “Equine Injury Database” is but a marketing tool, created in the wake of Eight Belles and all the bad press that ensued, existing solely to quell an increasingly unsettled public with an empty promise of “we’re on this, we care.” They’re not and they don’t.

20+ Yr Insider commented: “When a horse breaks down or is pulled up due to injury in a race, they will at all means transport the horse off the track, and put it down in the barn area. By doing this they don’t have to report the death of said horse as a racing death. This makes the statistics look better, while covering up the truth.”
—

FEATURED IMAGE PHOTO CREDIT: SPOKEO.
Eight Belles falls to her chest as she fractures both front legs after crossing the finish line in the 2008 running of the Kentucky Derby.

FEATURED VIDEO
New York Times, 2012 — That was then. This is now. Gambling keeps this industry alive. You Bet. They Die.