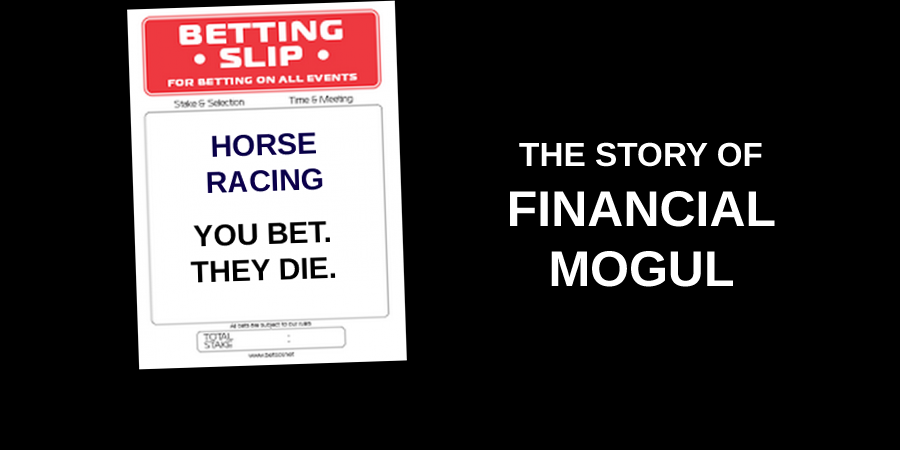 WRITTEN AND REPORTED BY JOY ATEN

Just two days ago, another trashed racehorse was recovered from a kill buyer. Thanks to a rescuer who makes weekly visits to the notorious New Holland auction, a 5-year-old gelding named Financial Mogul narrowly escaped a tortuous trip to the slaughterhouse. Here is his story:

Financial Mogul ran 12 of his 13 lifetime starts for owners Klaravich Stable/William Lawrence and trainer Rick Violette Jr. He “broke maiden” his second time out. Then “success,” with six consecutive graded-stakes races. But in that sixth one he finished 12th of 13 – 21 lengths behind. Three races at the “allowance” level followed, the last on November 1, 2014. Twenty days later, Financial Mogul was put up for sale in a claiming race; he was claimed for $25,000 (Linda Rice/Antonino Miuccio). Not including the $25,000 sale tag, the then 3-year-old had made over $170,000 for his original “connections.”

After a seven-month hiatus, Financial Mogul re-emerged at Belmont in June 2015. Though he was claimed again that day – Dennis Lalman, The Players Group – his racing career was over. Next stop, the kill auction.

But here’s where the story becomes even more perverse: This past September, three months after Financial Mogul’s last race and a mere seven months before he was slated to be slaughtered, the NYS Gaming Commission hosted a “Retired Racehorse Summit” in Saratoga Springs.

At this summit, which talked of “responsible stewardship,” “entire life cycles,” and “viable options once the athletes’ racing careers are over,” Rick Violette, yes the very same Rick Violette who shared in the $170,000 that Financial Mogul earned during his heyday, played the part of concerned horseman. Speaking on the need for more accredited aftercare facilities, Violette said (WAMC): “We just don’t want to get horses off the books and never see them again just because they’re out of sight, they’re out of mind.”

Truth is, Violette and Financial Mogul’s original owners did exactly that – got their fast-sliding gelding “off the books” in a successful claim at Aqueduct in November 2014. And if not for the extraordinary efforts of an extraordinary person, their once-prized racehorse would have met a violent, bloody end in a Canadian abattoir.

Sadly, though, this biography – like the overwhelming majority in Racing – has no happy ending.

Yesterday, Financial Mogul was brought to Penn Vet’s New Bolton Center for a full evaluation. Lame even at a walk, he was diagnosed with severe, end-stage fetlock arthritis, multiple chip fractures in an ankle and an old sesamoid fracture.

In addition, he was lame behind – which could have been from compensating from his front limb pain or from additional hind limb injury. Surgical intervention was not an option, and his prognosis for a pain-free life, even as a pasture pet, was extremely poor.

This is horse racing. You bet. They Die. If it weren’t for betting this industry wouldn’t have a leg to stand on.