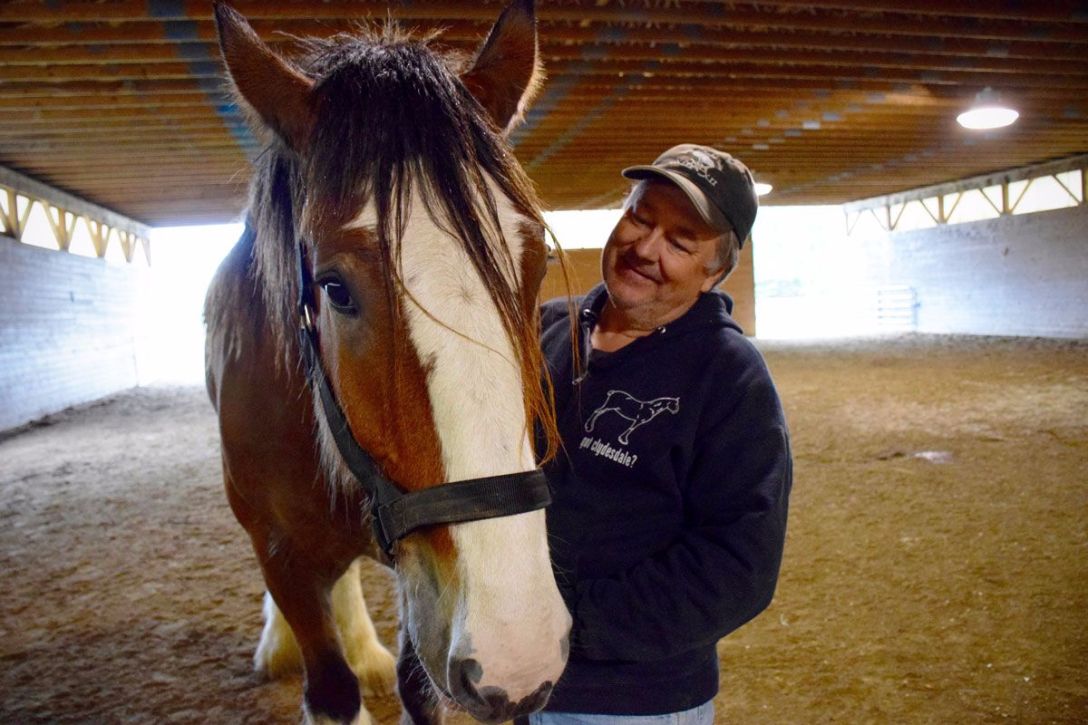 BUCKPORT, Maine (The Elsworth American)  — Earlier this month, a Texas couple moved to Silver Lake Road with a very large 5-year-old. His name is Butch, and he is a 2,700-pound Clydesdale horse, but don’t let the size scare you.

“You’ll see they are just very giant puppy dogs,” said David Doane, who takes care of Butch, six other horses, a mule and a cat along with his wife, Michelle Rhodes. The whole bunch moved to Bucksport from Texas earlier this month. “They would sit in your lap if they could figure out how to.”

Clydesdales are a large breed of horse used originally for pulling plows or hauling coal. Today the breed is famous for its appearance in Budweiser beer commercials, but it also plays a troubled role in the production of an estrogen-rich drug called Premarin, which is used to treat symptoms of menopause.

Premarin is made of the estrogen found in pregnant mare urine and, considering their size, Clydesdale mares produce a lot of urine. Several pharmaceutical companies put thousands of Clydesdale mares in pens, where they stayed for months at a time and urinated into bags. Once the mares delivered their foals, most of the foals were sold for slaughter, their meat shipped to consumers in Europe and Asia.

“It’s a nasty business,” Rhodes said. “They sell the babies to slaughter if people don’t adopt them.” Continue reading »

FEATURED IMAGE
David Doane smiles at Butch, one of his and his wife Michelle Rhodes’ seven horses. The gang, which also includes one mule and one cat, moved to Bucksport from Texas earlier this month. The Elsworth American.
PHOTO BY DAVID ROZA.