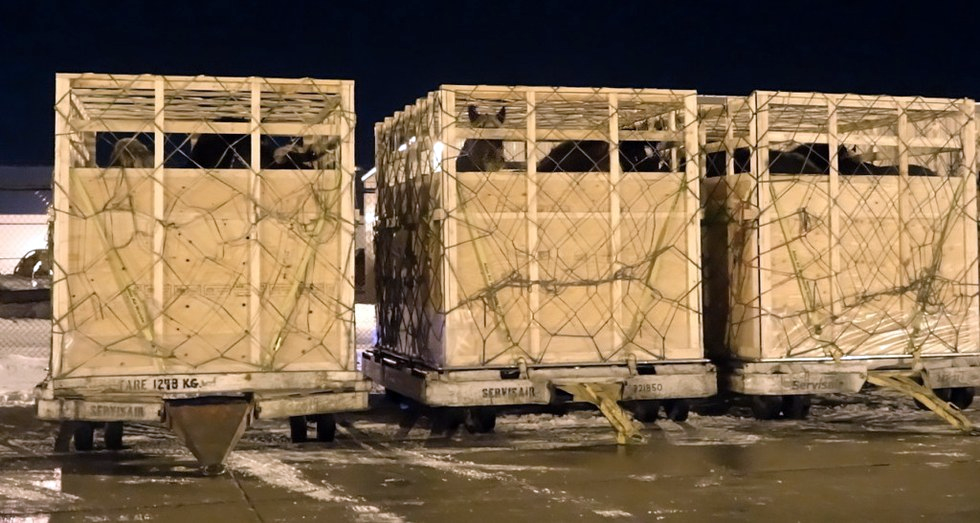 Shannon Mann sat in the woods, well supplied with food, toilet paper and her video camera, waiting for the trucks to pick up horses bound for slaughterhouses in Asia, where their meat is considered a delicacy. She had combed the Alberta countryside using Google Earth to locate the horse feedlot, two hours south of Calgary. From her hiding spot, Mann, an equestrian turned animal rights activist, watched the gates for eight hours until the trucks arrived. By then, she was accustomed to long stakeouts. She’d spent hundreds of hours in a parking lot adjacent to the Calgary airport filming crates of Belgian-cross draft horses being loaded into the belly of planes headed for slaughter, mostly in Japan. “At that time in my life I was very determined,” recalls Mann, who later volunteered for Sea Shepherd, the ocean conservation group known for high seas confrontations with whaling vessels.

Mann had read the Canadian animal-health regulations which require horses over 14 hands high to be shipped solo in containers large enough to allow them to stand in a natural posture. But she had routinely observed groups of three or four large horses being loaded into one crate with ceilings so low their ears poked through the top. “There was no way they had enough room,” she says. She condensed her footage into a three-minute YouTube video and in 2012 gave it to Sinikka Crosland at the Canadian Horse Defence Coalition, an animal rights group lobbying to stop the slaughter of horses. Here, thought Crosland, was the perfect opportunity to raise awareness for their cause.

The footage circulated among activists for years, building support for a court case that is now drawing unwelcome attention to Canada’s role in the horsemeat market—a trade activists in the United States succeeded in shutting down more than a decade ago. In 2018, nearly 3,400 live horses were flown abroad from Canada to become food for humans. Almost all went to Japan where their meat is sliced thin and eaten raw like sashimi, layered over rice or cooked in hot pots. It’s a market that for decades operated out of the public eye—perhaps because its participants feared how it would be viewed. One of Canada’s horsemeat producers is quick to defend the trade to Maclean’s but so afraid of becoming a target of activists, he would only speak on condition of anonymity. “Horses are livestock in Canada and should be considered the same as other livestock,” he says. His business provides a “humane service and financial gain” to horse owners who need to get rid of their animals, he adds: “Euthanizing them may cost thousands of dollars for vet fees, medication, and disposal fees.”

Many Canadians don’t see it that way; they regard horses as companion animals more akin to dogs than livestock. They find the idea of eating them repellent. From coast to coast, horse rescue groups are at work to save as many as possible from auction houses where they are sold for slaughter.

But finding a way to end the trade has proven challenging, so Crosland’s organization has instead taken aim at how the animals are transported—with photos from Mann and other activists as evidence. The Federal Court challenge claims the Canadian government is violating its own animal welfare regulations by allowing the transportation of large horses in containers that are too small and crowded.

The case has already drawn levels of attention and outrage that years of conventional public awareness campaigning never did. Continue reading article »