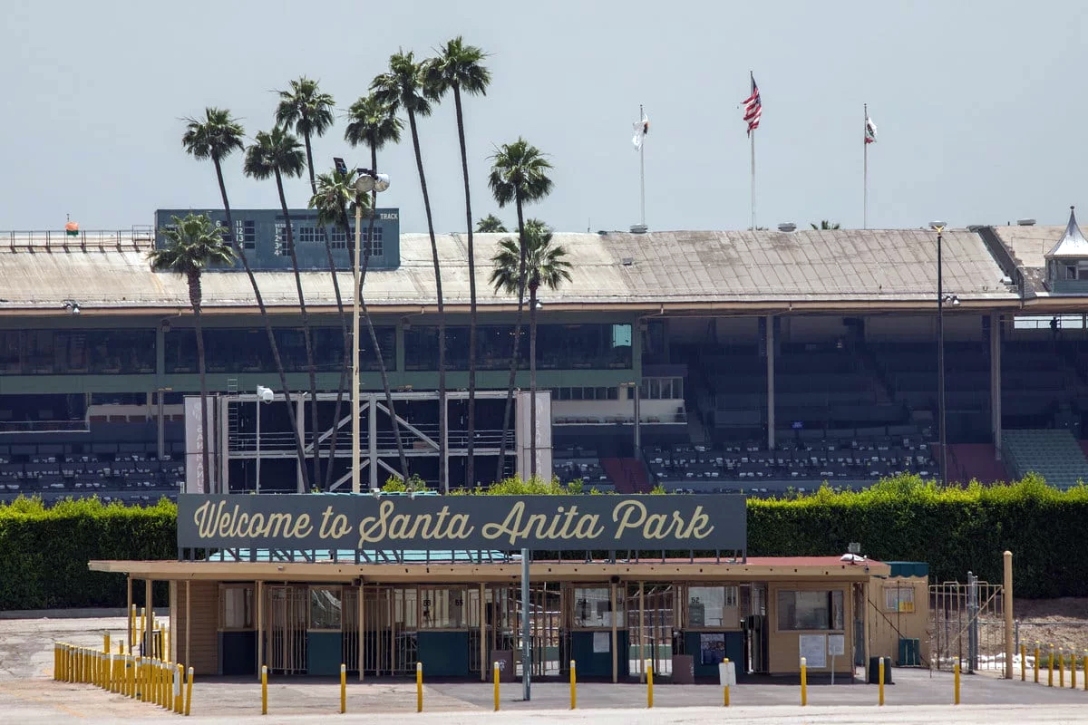 As of this writing, a dozen horses who raced at Santa Anita are among the U.S. racing dead.

4-year-old Golden Birthday, died after being injured during a January 1 race, becoming the first horse to die at the Santa Anita racetrack in 2020. CNN »

The latest spate of fatalities at the track began on Friday, when a 6-year-old gelding named Harliss broke an ankle in a turf race and was euthanized, according to racing officials.

On Saturday, a 5-year-old gelding named Uncontainable also broke an ankle in a claiming race on turf and was euthanized. NYT »

The third death came on Sunday when Tikkun Olam, a 4-year-old gelding who had won $40,743 in nine races, collided with another horse while training on dirt. The nature of the horse’s injuries was not immediately clear. NYT »

2 year old Miss Romania, dead, following a “fractured shoulder”. It was the first death on the main track, where the majority of the deaths in 2019 occurred, according to the park via ABC News. HW » ABC NEWS »

A 4-year-old horse was euthanized Thursday at California’s Santa Anita Park after suffering a fracture in training, becoming at least the seventh horse to die at the famed complex in 2020. The horse, Unveiled, fractured his right humerus while galloping in morning training, the facility said. CNN »

Chosen Vessel, a 5-year-old gelding, suffered a fracture of the left front ankle while on the turf course, a park report says. X-rays showed the horse could not recover, and the attending veterinarian recommended to put the animal down, the report said. CNN »

Santa Anita was closed for racing beginning March 27, following a directive from the Los Angeles County Public Health Department, citing the coronavirus. The facility was permitted to remain open for training, weather permitting.

According to the California Horse Racing Board website, a 2-year-old filly named Smiling Ali died. She had yet to race and was trained by Jeff Bonde.

Smiling Ali had just completed a two-furlong timed workout in 25 seconds when she died on the main dirt track. The cause was not immediately determined, although it was believed to be a probable heart attack. A required necropsy will be conducted. ESPN »

M C Hamster, a 4-year-old filly, suffered a fractured left front ankle after a three-furlong workout on the main dirt track Wednesday. It was just the second day training has been allowed since April 6 because of rain.

Trained by Ryan Hanson, M C Hamster finished fifth in her final race on Feb. 24 at Turf Paradise in Phoenix. She moved to Santa Anita, where she worked out on March 30 and again Wednesday. M C Hamster had three wins in eight career starts and earnings of $36,730.

M C Hamster is the fourth horse to die on the main track since Dec. 26. Four others died on the turf course and three on the training track. ESPN »

Last Renegade, a 2 yr old colt who had yet to make his racing debut, died Friday, according to information posted on the California Horse Racing Board website.

Mike Marten, public information officer for the board, told City News Service on Saturday that Last Renegade “threw his rider, ran loose, and went over the inside rail. He was ambulanced back to his barn where he was attended by his private veterinarian, but died shortly thereafter.”

Last Renegade was trained by Peter Eurton, who has earned $32.8 million during his 30 years as a trainer. NBC Los Angeles »

SIDE NOTE: “Horses are not fully mature until between the ages of five and seven years old. A horse is a horse — and they all mature at approximately the same rate.” See When are horses mature?, Isabella Edwards, Equine Wellness Magazine.

Sources: Media reports and Horseracingwrongs.com (see all kills at HW).

5 thoughts on “Santa Anita’s racehorse dozen of the dead”