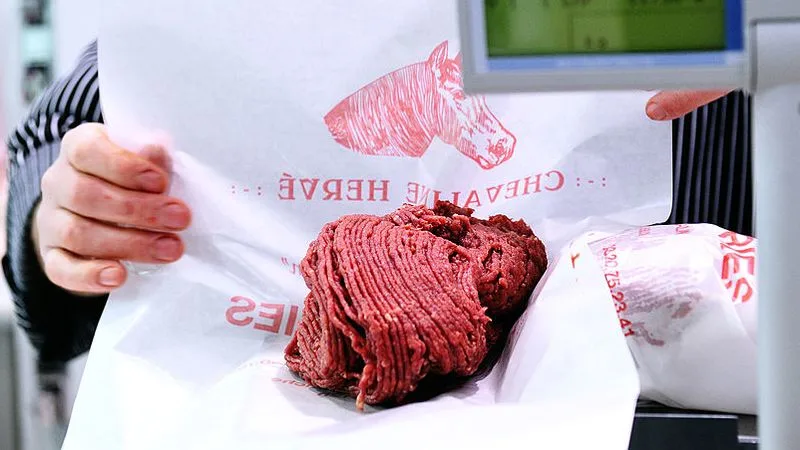 For much of humanity’s early existence, man hunted wild horses as a source of protein. Today, horse meat forms a significant part of the culinary traditions of many countries, particularly in Europe and Asia.

Horses slaughtered for human consumption are processed in a similar fashion to cattle, i.e., in large-scale factory slaughterhouses (abattoirs) where they are stunned with a captive bolt gun and bled to death. In countries with a less industrialized food-production system, horses and other animals are slaughtered individually outdoors as needed — in or near the village where they will be consumed.

Jurisdictions that allow for the slaughter of horses for food rarely have age restrictions, so many are quite young, some even as young as 16 to 24 months old. The meat from horses at the age of 6 months has lower value of moisture and protein and less appetizing to the human palate.

Horse meat has a slightly sweet taste somewhat reminiscent of beef. Many consumers allege not being able to tell the difference between beef and horse meat. Meat from younger horses tends to be lighter in color, while older horses produce richer color and flavor, as with most mammals. Horse meat can be used to replace beef, pork, mutton, venison, and any other meat in virtually any recipe, and usually very lean.

A misconception exists that horses are commonly slaughtered for pet food. In many countries, such as the United States, horse meat was outlawed for use in pet food in the 1970s.

Canada and Mexico are two of the main exporters of horse meat to Europe, according to Humane Society International. At least 85% of horses slaughtered at European Union–approved Canadian horse slaughterhouses originated in the United States, and 50% of the horse meat produced from those animals was exported to the EU.

It is not a generally available food in some English-speaking countries such as the United Kingdom, South Africa, Australia, Ireland, the United States, and English Canada.

Horse meat is taboo in Brazil, Poland, Israel, and among the Romani people and Jewish people the world over. Horse meat is forbidden by Jewish dietary laws because horses do not have cloven hooves and they are not ruminants.

Horse meat is not generally eaten in Spain, except in the north, but the country exports horses both as live animals and as slaughtered meat for the French and Italian markets.

Horse meat is consumed in some North American and Latin American countries, but is illegal in some others. The Food Standards Code of Australia and New Zealand definition of ‘meat’ does not include horse.

In Islam consuming horse meat is not haram, but merely makrooh, which means it should be avoided, but eating it is not a sin like the eating of pork.

The consumption of horse meat has been common in Central Asian societies, past or present, due to the abundance of steppes suitable for raising horses.

In North Africa, horse meat has been occasionally consumed, but almost exclusively by the Hanafi Sunnis; it has never been eaten in the Maghreb.

The killing of horses for human consumption is widely opposed in countries such as the U.S., UK and Australia where horses are generally considered to be companion and sporting animals only.

Australians do not generally eat horse meat, although they have a horse slaughter industry that exports to EU countries.

In October 2019, the ABC revealed to a shocked Australian citizenry that thousands of retired racehorses were being slaughtered annually for the export market in human consumption. Each year, about 8,500 horses are retired from racing, many of whom are slaughtered.

Opposition, however, is far from unanimous from English speaking nations; a readers’ poll in the London magazine Time Out showed that more than half of the respondents supported chef Gordon Ramsay’s decision to serve horse meat in his restaurants.

3 thoughts on “Horse meat and who eats it”