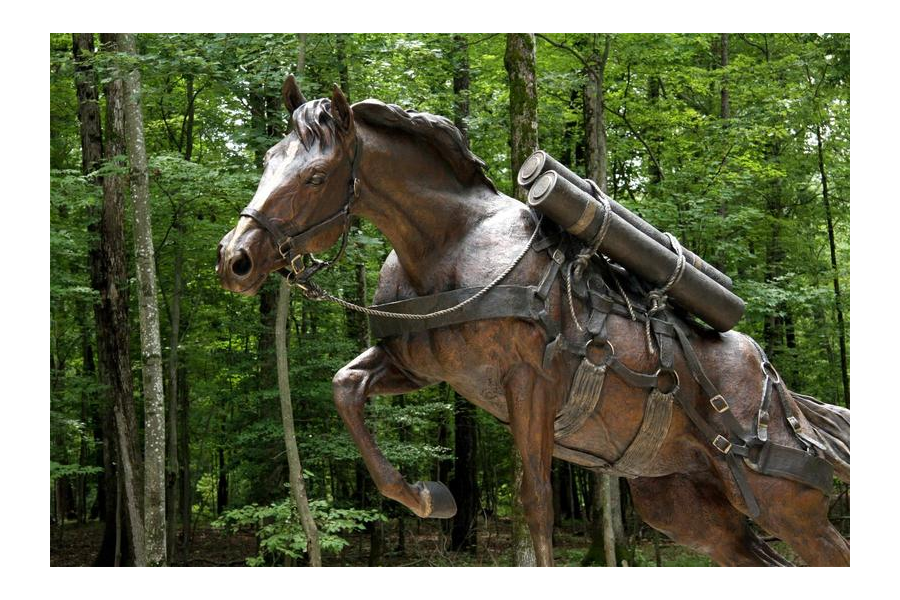 More than 8 million horses, mules and donkeys died in World War I alone. These rugged animals transported ammunition and supplies over landscapes that vehicles could not navigate. And they suffered the same fate as the human warriors, dying from shellfire, weather, chemical gas, or disease.

First World War: 7,000 horses died in one day alone at the Battle of Verdun.

Steven Spielberg insists that his movie, War Horse, based on the 1982 novel by Michael Murpurgo, is not a war film but a story about a boy and his horse. Yet the image that will haunt audiences is that of the hero, the beautiful horse, a stark reminder of all the beautiful horses that went to war and died.

There was a real-life model for the war horse in the film. His name was Warrior (pictured above), and he went to war in 1914 with his owner, a British general named Jack Seely. Both survived, defying even the horrors of the Somme. Warrior was celebrated as a hero and died in 1941, in the middle of another war, a few weeks short of his 33rd birthday. Although revered, he was not buried with the expected pomp and ceremony. Instead his body was donated to the war effort and used for meat.

More then 5,000 years have passed since man first began riding horses. For much of that time the animal, now mostly associated with sport, was involved in war and military campaigns.

Archaeological evidence confirms that the use of a bit began somewhere in what is now Russia. The invention of the wheel led to the introduction of the chariot, a vehicle that carried two men, one controlling the horse that pulled it, the other, an archer, fighting from a moving platform.

Although nervous by nature, the horse made warfare faster. A mounted warrior had a huge advantage, giving riders the element of surprise. Horses also helped in reconnaissance and in making swift getaways after attacking settlements under siege. Through sheer size and an ability to kick and trample, the animals also intimidated anyone on the ground. Greek armies made use of horses, and the first manual on horsemanship was written by a cavalry officer, Xenophon.

The earliest version of the treed saddle is attributed to the Romans, although their armies were predominantly made up of infantry. The stirrup, initially devised in India as a single mounting device, was later recognised, apparently by the Chinese, as vital in assisting a rider’s balance when paired stirrups were attached to the saddle.

The Mongols quickly adopted these innovations as they swept across Asia and into Europe. Horses not only pulled chariots and carried riders but also proved invaluable throughout history in hauling supplies and, as warfare developed, field artillery and heavy guns.

Speed and power are but two of the qualities possessed by the horse. The earliest soldiers, such as the Mongols and the Arabs, used small, light horses. The native Irish rode ponies, but it was the Vikings, most commonly associated with seamanship, who introduced the stirrup to northern Europe in about the ninth century. Soon afterwards, the advent of armour required bigger, heavier horses to carry the Norman knight.

The Byerley Turk, who fought at the Battle of the Boyne in 1690 and later at the Battle of Aughrim, was one of the three foundation stallions of the modern thoroughbred. He was foaled in Serbia and served the sultan of the Ottoman Empire before being captured by the English as a spoil of war after the siege of Buda. Muslim warriors had taken north Africa before conquering the Iberian peninsula in the seventh and eighth centuries.

Far more important than its military exploits was the fact that the horse brought Arab bloodlines to Europe and, through them, possibly the toughest of equine breeds. The Arab horse had speed and incredible endurance and was the ideal charger. Native European horses were better suited to carrying armour and equipment.

The decline of armour played its part in the changing face of war. From the 14th century to the middle of the 16th century, European war became infantry-based. Then the use of cavalry re-emerged. Professional soldiers had replaced knights, and talented horsemen saw an obvious career in war. Although armies built up huge reserves of foot soldiers, the cavalry acquired glamour to go with the danger it represented. Horse units became central to the choreography of war, and armies began breeding horses specifically for war.

Napoleon favoured mounted soldiers as a sure method of intimidating enemy infantry. By the 19th century the horse was caught in the middle of battlefields and random crossfire. When Napoleon marched on Russia one division lost 18,000 horses in two months; 30,000 horses died during the 1812 retreat from Moscow. The Second Boer War, in 1899-1902, claimed hundreds of thousands of horses.

Horses had been reintroduced to North America by the Spanish in the 16th century. Native Americans knew nothing of the animals until then, but they quickly mastered them. This created immense problems for the US army as well as for pioneers setting out to claim territories. More than a million horses died in the American Civil War, but while Union forces were provided with army mounts, many Confederate soldiers rode their own horses. Part of their terms of surrender was that they should be able to bring their horses home.

Tanks would change the nature of war,
but not before eight million horses, donkeys and mules had died.

The first World War saw the emergence of technology. While the cavalry officers in Joseph Roth’s The Radetzky March muse about the rumours concerning the death of the emperor’s nephew, their way of life is about to come to an abrupt end. Trench warfare, gas attacks, barbed wire, machine guns and —from 1917 onwards — tanks would change the nature of war, but not before eight million horses, donkeys and mules had died.

Horses were active on the Western Front and even more so facing the Ottoman offensive, to the east. They were also used as pack animals, moving food supplies and ammunition. The British cavalry were effective, both mounted and on the ground, as they were trained soldiers.

Although it is often assumed that the days of the great mounted charge were already over by this time, many charges were staged in the form of shock attacks on trenches. Just imagine the suffering of the horses, the most nervous of flight animals, with their fear of loud noises, flashing lights, the smell of blood. Many horses had their vocal cords cut to prevent them from whinnying.

Nor did this treatment end with the Great War. Both the Germans and the Soviets used horses in the second World War, the Germans losing 52,000 of them during the battle for Stalingrad.

Because of motorised transport shortages, the German army used an estimated 2.75 million equines for haulage; more than 3.5 million served the Soviet war effort.

Whenever people recall Tennyson’s immortal lines “All in the valley of death / Rode the six hundred”, most mourn the loss of the hapless horses involved in the famously pointless Charge of the Light Brigade, which took place in 1854, during the Crimean War. Between 600 and 660 mounted men and horses were involved in this futile act, which has become iconic. There were 118 human fatalities; 335 horses died or were later destroyed because of their wounds.

Horses are still seen in use by organized armed fighters in developing countries. Many nations still maintain small units of mounted riders for patrol and reconnaissance, and military horse units are also used for ceremonial and educational purposes. Wikipedia.

A soldier from the 3rd U.S. Infantry Regiment, known as “The Old Guard,” leads a riderless horse during the Memorial Day parade in Washington, D.C., May 27, 2013. The riderless horse carries a soldier’s boots reversed in the stirrups. Army photo by Staff Sgt. Teddy Wade.

• Famous Horses of the Civil War »