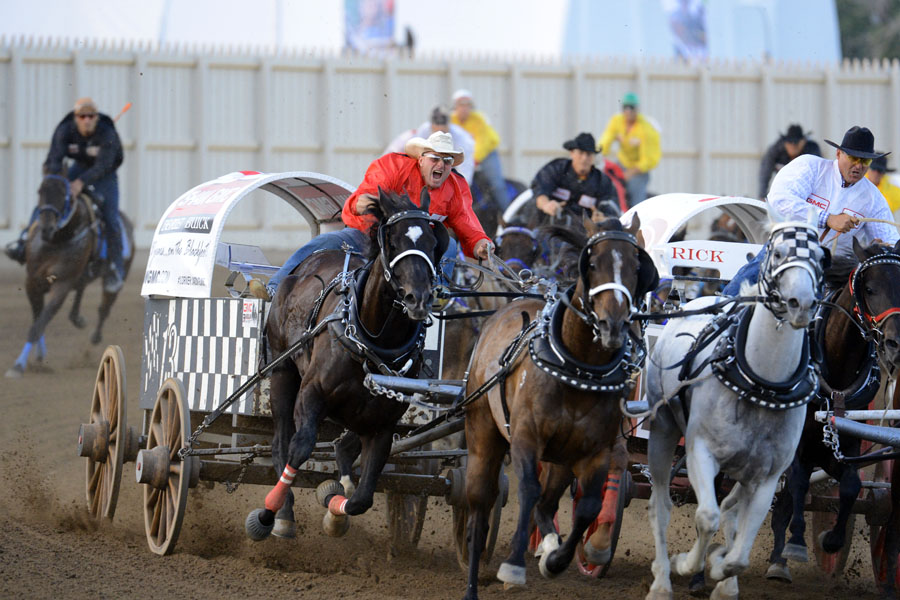 So the headline states, hoping to woo people who care about horses into thinking that the Stampede chuckwagon event can be turned into something more agreeable and acceptable.

Chuckwagon racing is brutal and dangerous to horses and should be banned — whether horses are killed or not. Is that what it takes — dead horses — for people to even begin to consider events such as these as cruel, abusive, immoral and deadly?

Say they do not happen to kill any horses this year or next? Or kill any during training or practice? What about the horses who are injured and can no longer compete? From the numerous reports we hear, injured horses who are relatively mobile or can be dragged into some mode of transport, are taken to a slaughterhouse where they are brutally and terrifyingly murdered for their meat.

“The Rangeland Derby chuckwagon races return to this year’s Stampede after missing the past two years — in 2020, after the entire Stampede was cancelled due to the COVID-19 pandemic, and in 2021, as organizers cited safety issues.”

“The chuckwagons have long been controversial among animal rights groups in Canada and the United States.”

“In 2019, the last time the derby was held, six horses died [why do make is sound so passive? these horses did not die; they were killed—TH]. That matched the second deadliest toll in the Stampede’s history.”

And this guy. It beggars belief.

In other words, it will still be dangerous, just not quite as dangerous as it was, and therefore not as good. We get you.

“The Stampede said it is undertaking an effort to do enhanced veterinary inspections, and pointed to ongoing studies at the University of Calgary focused on chuckwagon races.”

“Researchers at the university are trying to find ways to reduce the chance of horse injuries by studying track conditions and how they impact the hooves and bones of horses while galloping at full speed. Sensors were placed on horses’ hooves, cannon bones and radiuses using saddles fitted with devices to measure data.”

Come on. Really? Racehorses breakdown and are killed or destroyed as a matter of routine around the world, and those horses are not doing anything nearly as brutal as what chuckwagon horses are forced to endure. Get out of town with your b*llsh*t.

Read the whole article here if you have the stomach for it. Thank you CBC for publishing it — so that good folks can perhaps begin to understand how horrific these horse abusers . . . . think and are.

A horse was put down following an injury during Calgary Stampede chuckwagon races, reports Ponoka News. “Organizers say in a statement that the horse on Cody Ridsdale’s team was hurt during the fourth heat of Thursday night’s competition. Following a veterinary assessment, the owner decided it would be humane to euthanize the animal.”

That means the horse at least was spared a trip to the slaughterhouse if the report is factual.