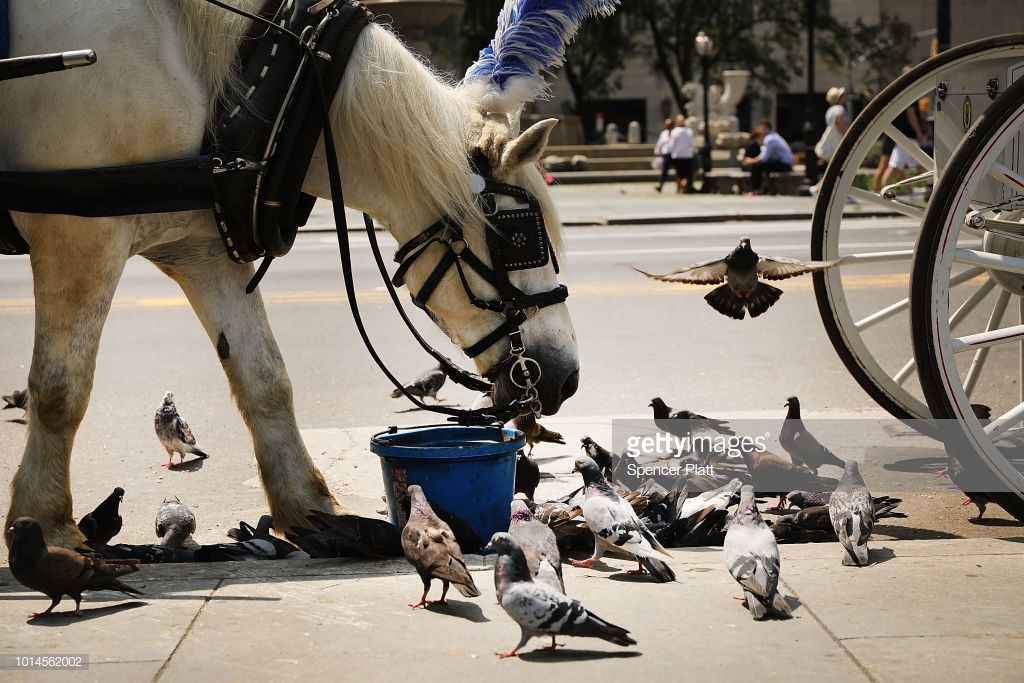 New York City took another step towards the protection of animals across the city on Monday, with Mayor Bill de Blasio signing off on a new law that included carriage horses.

The legislation limits when horse carriages can operate in hot weather — six years after pledging to rid the city of the industry entirely.

Central Park’s carriage horses are already banned from working when temperatures hit 90 degrees or more in the summer and when it’s 18 degrees or below in the winter.

But the legislation signed by de Blasio would also prohibit carriage horses from working when temperatures hit 80 degrees and the “equine heat index” — the sum of the temperature and the relative humidity at any point — is at least 150. This will potentially increase the number of weather related suspensions from 24 to 44 which threatens the livelihood of the carriage horse business in New York.

A group called NYCLASS has pushed lawmakers to end the carriage industry for years, although critics of the group note its co-founder Steve Nislick, a real estate developer, has also in the past lobbied the mayor for an affordable housing plan in the neighborhood around Manhattan’s largest carriage stable.

After de Blasio’s 2013 campaign got a financial boost from NYCLASS, he promised to completely ban Central Park horse carriages “on day one.” The effort failed spectacularly, though the city limited pickups to inside the park in 2018 at the urging of NYCLASS.

“The mayor signing this bill indicates that he is part of NYCLASS’s systematic effort to destroy the carriage horses,” carriage driver Christina Hansen said, saying the bill was “unscientific.” 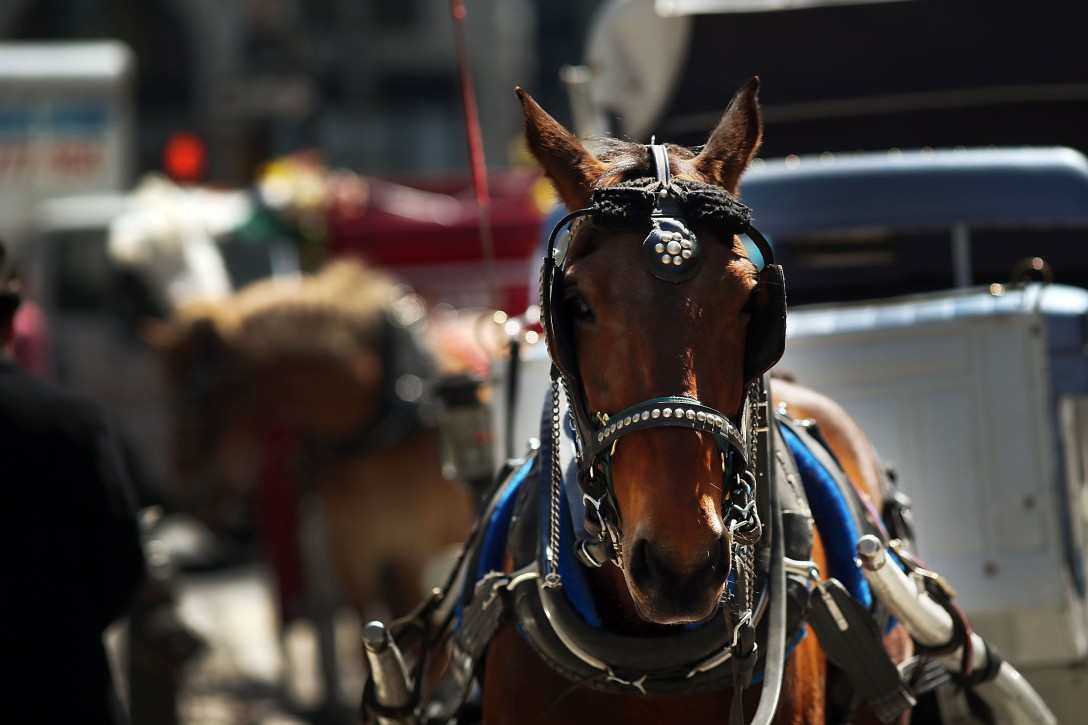 MANHATTAN, NYC — It is almost unbelievable the way yesterday’s runaway carriage horse incident is being reported. Not so much factually as spiritually.

An out-of-control horse backpedalled in the middle of a midtown street during the Monday morning rush, authorities said.

Two horses were being taken from a nearby stable to Central Park, where they give carriage rides. It was near Eighth Avenue and 55th Street that one of the horses became startled.  Read more, view video story »

Here is what was commonly reported.

A carriage horse bolted on the streets of Midtown Monday morning galloping through several streets before slamming into a yellow cab.

The horse’s head ended up against the taxi with one of his hooves jammed under the front left wheel.

The horse had not been pulling a carriage at the time he broke free and ran away. Witnesses say they believe he escaped from the place where he was being kept.

The runaway horse was checked over at the scene of the accident and said to “look okay”.

That was it. Checked over. Looked okay. Nothing about having a licensed veterinarian taking a look at the horse. I suppose with complaints now flowing in they will say they did that once they got him back to the garage, ahem … I mean, stable. 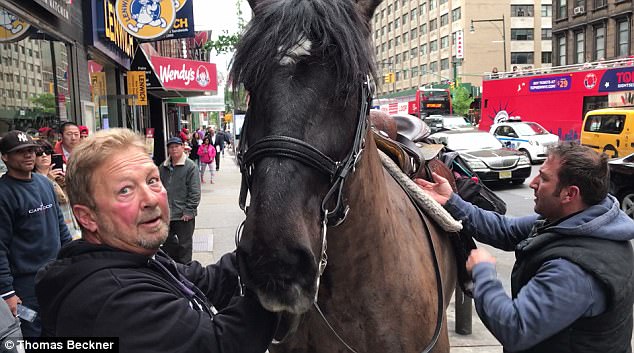 Speaking of getting the horse back to where he was kept, how about this?

They did not walk the runaway horse gently back to his multi story  stable. Nor did they call for a vehicle to transport him there as in other carriage horse accidents (the horse’s accommodation was assumed but not verified as being close by).

They saddled him up to be ridden back to his claustrophobic digs.  Perhaps this is what motivated our runaway horse to escape in the first place —  to taste a just bit of momentary freedom.

The above is a summation from what various news outlets are reporting in common on this story.

There is nothing natural about the conditions carriage horses live and work in, particularly in cities like Manhattan. More often than not these conditions are mentally and physically cruel. What more do you need to know?

Contact Mayor DeBlasio whether you live in New York or not — but especially if you live there — and complain about carriage horse abuse and practices and challenge him to at long last fulfill his election campaign promise to ban it. No more excuses, such as in 2015 when DeBlasio blamed the NY City Council for his failure. Sorry Mr. Mayor. No sale.

Think about what you want to say and send the Mayor of New York City a letter, an online message or telephone his office to have your important say.

How we wish a star like Jon Stewart would step in and save this runaway horse. This horse reminds us of former NYC carriage horse Oreo who also escaped,  but he ended up in greener pastures. Read about Oreo here.

Cross-posted from the New York Daily News
BY DENIS SLATTERY

A herd of animal rights activists demonstrated outside the Upper West Side home of Liam Neeson Saturday, blasting the actor for his outspoken support of the carriage horse industry.

The roughly 60 protesters marched in front of Neeson’s condo carrying signs with pictures of dead horses and the words “worked to death” and “horses + traffic = death.”

Two of the demonstrators even donned full-body equine costumes in the hopes of confronting the actor.

“Liam Neeson has made the shameful choice to be the only celebrity voice on the side of the cruel, outdated horse carriages,” said Ashley Byrne, 36, a spokeswoman for PETA.

“Any New Yorker can see that this industry has been responsible for over a dozen accidents over the past few years alone.”

Cross-posted from the New York Times

The newest residences at Mercedes House, a ziggurat of luxury rentals on Manhattan’s Far West Side, provide tenants with creature comforts found nowhere else in the city.

Most crucially, there’s a state-of-the-art hayloft.

This summer, Inspector Gelbman will move the unit’s headquarters and a dozen of its horses and 20 officers into their new home on the ground floor of Mercedes House, which since 2011 has been home to about 1,000 humans. After a decade, the mounted unit is leaving behind its stables at Pier 76, now a part of Hudson River Park.

While there are a handful of stable-centric subdivisions in places like Colorado, Montana and Florida, Mercedes House appears to be the only corral in the United States located inside an apartment building.

Even in crowded Manhattan, it is an unusual arrangement.