Death and disarray on the racetrack seems to know no bounds.

The numbers in the title of this post are what you find when visiting the UK based Animal Aid’s Race Horse Death Watch page. They describe their mission:

Animal Aid’s Race Horse Death Watch was launched during the 2007 Cheltenham Festival. Its purpose is to expose and record every on-course thoroughbred fatality in Britain.

The horse racing authorities have failed to put clear, unambiguous horse death information into the public domain, preferring to offer complex statistical data rather than specifying, as Death Watch does, the names of killed horses, where the fatality occurred, who was riding the horse and the nature of the injury.

We have good reason to believe that the equine fatalities we are able to list on Death Watch, and which we have verified, fall some 30% short of the true total. Disgruntled industry insiders have, in the past, supplied us with documents to support that view.

Here are Animal Aid’s Race Horse Death Watch’s ten most recent entries. These injuries and deaths happened mostly over jumps. They note where the fatalities have occurred on the flat.

The Horse Fund have been in contact with the British Jockey Club and the British Horseracing Board over the years, warning them and asking them  — begging them actually — to bar the American Thoroughbred from their Stud Book because of their unsoundness which has been bred into them due to egregious and debilitating doping practices and abuses.

In the meantime, does it matter why and how so many racehorses are killed during racing outside of the U.S.? The question it raised for us is — what do they have in common since it’s not excessive, deadly drugging? Does it all start in the shed?

Whatever the answer to that turns out to be, the bottom line for U.S. horse racing is this.

American horse racing has problems which are now virtually insurmountable making its future assuredly doomed. It’s just a matter of time. Our concern is how many racehorses will be drugged, abused, tortured and killed before the final curtain?

There is no doubt whatsoever that the U.S. horse racing industry is on a death watch of its own, but not just in terms of its horses, but of the entire industry itself.

Forgotten Side of the Salix Debate: The Calcium Connection

• LASIX. In the 1960’s when U.S. Astronauts were going to the moon, American horsemen figured out how to prevent and manage Exercise Induced Pulmonary Hemorrhage (EIPH) or bleeding in horses with the use of Furosemide (Lasix/Salix).

• BUTE. Phenylbutazone (Bute) is an analgesic pain reliever and anti-inflammatory medication, commonly used for the treatment of horses.

So, what’s wrong with that?

“So Salix leaches calcium from the bones and bute aids and abets the outcome. Great combination if you are Gumby’s sidekick Pokey, the talking red horse with rubber legs.” Go to Report »

TRACK, DRUGS AND THE BREEDERS’ CUP

LEXINGTON, Ky. – A committee of the Kentucky Horse Racing Commission is scheduled to consider a rule next week that would allow tracks to write races that prohibit the use of the anti-bleeding medication furosemide within 24 hours of post time, according to material distributed by Kentucky horsemen’s groups.

The rule, which will be considered during a Rules Committee meeting scheduled for Monday, is nearly identical to an amendment brought before the committee last August. The committee voted 4-1 to table the proposal at that time, and it was not resurrected after that vote.

The rule “authorizes licensed racing associations to require adherence to the International Medication Protocol,” which the rule later defines as prohibiting the administration of furosemide within 24 hours of a race. It is currently legal in all U.S. racing jurisdictions to administer furosemide, also known as Lasix, four hours prior to a race.

On Thursday morning, the Kentucky Horsemen’s Benevolent and Protective Association, which has adamantly opposed any prohibition on the race-day use of furosemide in the past, distributed petitions via e-mail to its members in opposition to the new rule. The e-mail states that “it is suspected that this is a precursor to running the 2015 Breeders’ Cup Lasix-free.”

The 2015 Breeders’ Cup event is scheduled for Oct. 30-31 at Keeneland in Lexington. Members of Keeneland’s board of directors have supported efforts to prohibit the race-day use of Lasix in the past.

Craig Fravel, the president of the Breeders’ Cup, said in an e-mailed statement that “the subject of medication at the 2015 Breeders’ Cup has not been discussed by the Breeders’ Cup board,” and added that “we are supportive of Keeneland’s position on the proposed regulation.”

As mentioned, Keeneland will host the 2015 Breeders’ Cup.

For years Keeneland’s polytrack surface was one the safest tracks for horses to race on (by U.S. standards).

Keeneland reverted to dirt in order to attract the Breeders’ Cup.

Many bettors here and in the national simulcast market proclaimed their dislike for handicapping Polytrack races. Aah, poor things sitting on their stools in the dark peering at big screens risking their cash while the horses are out running on dangerous tracks risking life and limb.

Wise Dan, the two-time reigning Horse of the Year has trained over the Keeneland Polytrack his entire career.

“I really don’t understand why they’re doing it,” said Charlie LoPresti, the trainer of Wise Dan. “We know the track is safe; all reports have been that breakdowns are fewer. It’s kept a two-time Horse of the Year sound, I know that.”

WHAT CAN BE DONE?

The problems contributing to the continuing deterioration of the U.S. horse racing industry is a maze of complex, inter-related and overlapping symptoms for which there appears to be no cure. There is certainly no one quick fix.

What American racing halfheartedly offers up as a fix from time to time usually has an agenda attached to it and not really a serious attempt at change at all. All you have to do is take a look at the timing.

In this case the agenda is the Breeders’ Cup. There is a lot of prestige and money at stake. Ego and money, the great motivators.

The tragic victims in all of this of course are the vast number of horses that racing breeds, abuses, mutilates and destroys along the way.

Think of Pine Island, George Washington, Barbaro and Eight Belles. Each of their public breakdowns and deaths were heralded as the one that would finally make horse racing mend its way. But they haven’t. They still haven’t.
——–

1. The name Salix / Lasix are used interchangeably for furosemide. Furosemide is a loop diuretic used in the treatment of congestive heart failure and edema. U.S. horse racing states it is used to prevent exercise induced pulmonary hemorrhage (or bleeding in the airways following exertion).

Along with other diuretics, furosemide is included on the World Anti-Doping Agency’s banned drug list due to its alleged use as a masking agent for other drugs.

In virtually every major racing jurisdiction outside the U.S. furosemide has either never been allowed or banned outright, not just on raceday. This has neither endangered the health and safety of racehorses nor hampered competition. The use of Lasix should be banned. Period.

“So Salix leaches calcium from the bones and bute aids and abets the outcome. Great combination if you are Gumby’s sidekick Pokey, the talking red horse with rubber legs.” — JANE ALLIN (Quote from 2. below)

1. Drugs and Horse Racing — Shades of Grey and Triangle of Deceit; by Jane Allin; The Horse Fund

2. Forgotten Side of the Salix Debate: The Calcium Connection Part 1, Part 2; by Jane Allin; The Horse Fund

3. The Chemical Horse, Part 8: The Unclassifieds — Lasix and Milkshakes; by Jane Allin; The Horse Fund

4. “The Ugly Truth About Horse Racing“; by Andrew Cohen; The Atlantic 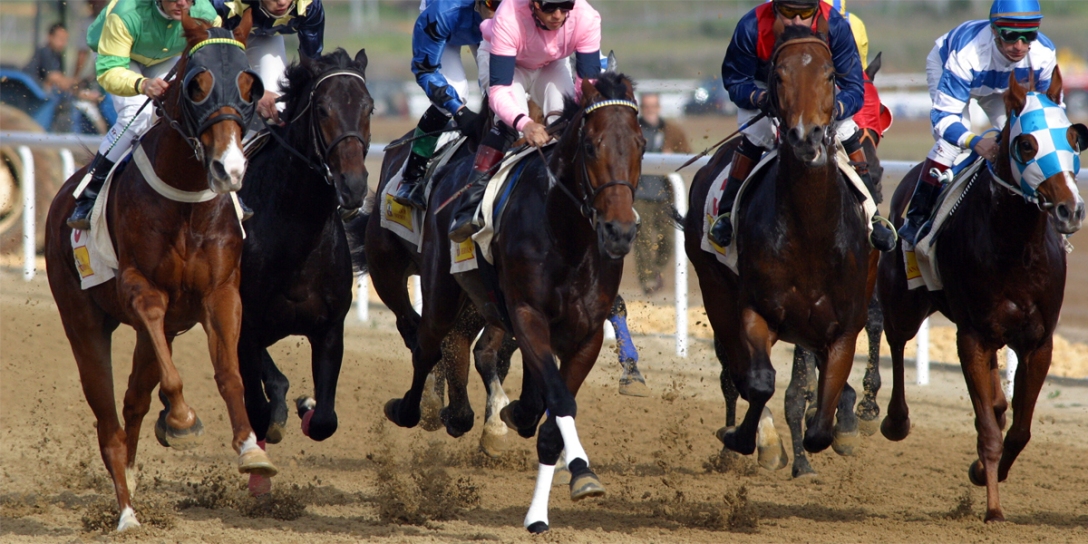 Cross-posted from The Blood-Horse
by FRANK ANGST

The Jockey Club has called on leading industry organizations to come together to conduct a Salix study that would examine the timing of administration on the medication used to prevent exercise-induced pulmonary hemorrhage.

Currently Salix is the only race-day medication allowed in U.S. racing and it typically is administered four hours before competition.

The KEDRC advises the Kentucky Horse Racing Commission on medication policies and awards money for funding of medication studies.

Jockey Club executive director Matt Iuliano attended the meeting to offer support of the study and called on industry leaders to come together to fund and shape it. A veterinarian, Lavin represents breeders on the KEDRC and is a Jockey Club member.

Iuliano said Lavin had talked about the study six or eight weeks ago. The idea was presented to the Jockey Club Thoroughbred Safety Committee, which approved Iuliano’s attendance at the KEDRC meeting to support moving forward with other industry groups on such an examination.

Yet another study. At least it isn’t another database, or is that yet to come.

These people are fooling no one but themselves. They need to get rid of it, end of story. And not just because it is a performance-enhancing drug but the negative health effects it has. See link to reports by Jane Allin below.

In the meantime, the Welfare and Safety of the Racehorse Summit scheduled for July 8-9 in Lexington.
__________

Oliver Tait, Darley’s chief operating officer, has resigned from the board of the Breeders’ Cup because of the organization’s medication policy.

“The Breeders’ Cup has reversed its previously agreed and stated position that the 2013 Breeders’ Cup World Championships will be conducted without Lasix,” said Tait in a Darley release issued March 3, referring to the anti-bleeding drug also known as Salix. “As a consequence, I have resigned from the board of the Breeders’ Cup.”

Board members voted March 1 to not expand its prohibition of Salix to additional championship races this year but opted to continue last year’s policy of banning the diuretic in only juvenile races. Breeders’ Cup had planned to expand a ban on race-day furosemide, also called Salix or Lasix, to all of its races in 2013, but board members voted to maintain the 2012 policy. That policy prohibits Salix use in Breeders’ Cup races for 2-year-olds but allows it in all other races.

“Progress is being made in all sports around the world in relation to drugs. This is not progress. The Breeders’ Cup is a leader of this sport, and I was extremely proud to serve on its board. Having rightly and boldly chosen to lead the way on the issue of drugs in racing in 2011, it has now stepped back in time. I hope that in the near future it can lead again.”

:: Drugs and Horse Racing: Shades of Gray and the Triangle of Deceit; Tuesday’s Horse; by Jane Allin; Feb 4, 2013