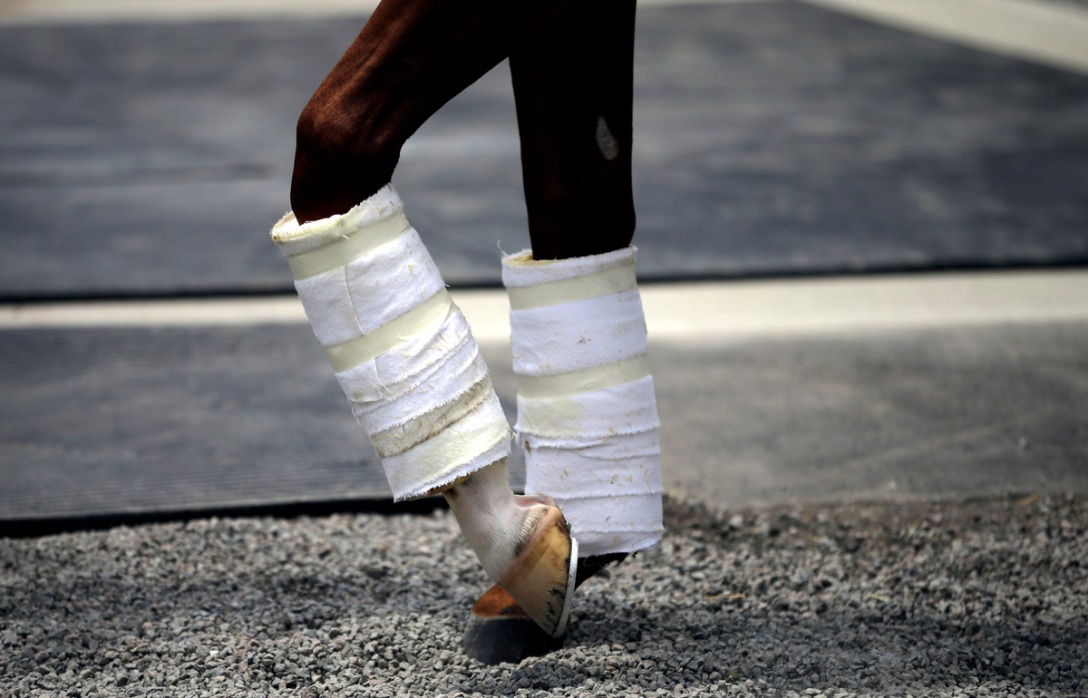 This article came across my desk as I was watching the video of I’ll Have Another running around a paddock, kicking up his heels, at his new home in Japan where he arrived recently to continue his racing career as a Thoroughbred Stallion.

Our horses are sick. Our thoroughbreds are thoroughly inbred. They are locomotives sitting atop toothpicks. They are fragile and friable, designed to run but not to recover from running. And each time they break down or wear out, we chalk it up to an individual horse’s shortcomings, rather than the decades-long decline of the entire breeding industry.

I’ll Have Another, who withdrew from the Belmont Stakes two days before the race, was not a healthy horse. The New York Times reviewed his veterinary records, and at just three years old, after just seven career races, I’ll Have Another had the legs and joints of an elderly horse. He had been suffering from osteoarthritis for “a period of time.” The tendinitis that scratched him from the race had also been a chronic problem for a while. He was receiving regular injections of multiple painkillers and anti-inflammatory fluids. A completely legal drug cocktail was the only thing keeping him going.

I’ll Have Another, like all of his other distant cousins that make up American thoroughbred racing, was built to go fast, but not to go far, or to go fast repeatedly. The reason, says legendary horse writer Andrew Beyer, is that today’s breeders are in it for a quick buck, and the quickest bucks can be found in producing sprinters, even at the expense of stamina.

You would think I’ll Have Another could serve as a cautionary tale. This is what an unnatural horse gets you: the shortest of careers. But to the hundreds of commercial breeders out there, he’s an aspiration. He won nearly $2.7 million in prize money in his career, and he was just sold to a Japanese stud farm for $10 million. His genes, which served him well in the short term, and threatened his life and his livelihood in the long term, are the ones that the market has chosen to pass on to as many descendants as possible. Brief and self-destructive wins out over protracted and viable, again, as it does thousands of times every foaling spring. Horse racing continues to go the wrong way.

What I’ll Have Another’s connections did with him in my estimation is despicable and represents to me everything that is wrong with the thinking in the U.S. Thoroughbred racing industry. Not many will agree with me. That is the way the game is played now, they say. You just don’t understand, they add. Oh, I understand well enough.

And before you attack me, I grew up in horse racing and worked in it both sides of the pond. I know just how fickle a business it is, and I know the difference between right and wrong.

Apart from that, I’ll Have Another’s story illustrates what I have been told repeatedly by both Thoroughbred breeders and trainers over the past few years.

Breeders say that trainers take their beautifully bred horses and destroy them with unscrupulous drugging and training practices. Trainers say that breeders are producing horses they can only win with if they use every drug and therapeutic technique they can get their hands on to get and keep these horses on the track.

It seems a hopeless business to me.

For those of you who work in the industry in the U.S. and do what is right, you are the unsung heroes of the game. –Ed.

Cross-posted from The Blood-Horse via the Associated Press

Rachel Alexandra, the 2009 Horse of the Year, and her newborn colt have been taken to an equine clinic for pain management related to the birth, according to a spokesman.

Spokeswoman Caroline Shaw said in an e-mail Jan. 27 that Rachel Alexandra and the colt are expected to return to Stonestreet Farm in a couple of days, barring unforeseen issues.

They were taken to Rood and Riddle Equine Clinic in Lexington “as a precautionary measure,” the e-mail said.

In a press release issued by the owner, it says the mare and foal are expected to return to the farm in a couple of days.

“Rachel has proven to be an extraordinary mother and taking to her feisty colt right away,” said owner Barbara Banke. “I’m a Rachel-chondriac. We are taking every precaution to ensure that Rachel and her colt are healthy and happy.”

All the great names in thoroughbred horse racing — from Secretariat to Man O’War, from Seabiscuit to Seattle Slew — they’re all related, and a team of geneticists has now traced their talent for speed back to a single ancestor. The “speed gene” that made them all so fast was apparently a genetic aberration, and it probably started with one British mare who lived in the mid-17th century.

Emmeline Hill of University College Dublin led a team that analyzed DNA in 593 horses from 22 modern breeds, as well as museum specimens from 12 historically famous stallions. Modern genetics have become sophisticated enough that they could tell, with considerable precision, what the horses had in common.

“The results show that the ‘speed gene’ entered the thoroughbred from a single founder, which was most likely a British mare about 300 years ago when local British horse types were the pre-eminent racing horses, prior to the formal foundation of the thoroughbred racehorse,” said Hill in a prepared statement.

She and her colleagues published their findings in the journal Nature Communications.

It will likely be years before a firm rule either further restricting race-day Salix or banning it outright is implemented. In the meantime, the globalization of racing will continue. Considering many trainers and breeders overseas already view American bloodlines as suspect and “tainted,” now is the time to begin debating how we will ensure the integrity of our bloodlines when medication no longer allows us to hide our flaws.

This is the final paragraph of an article by Eric Mitchell called “Breeding Integrity”, writing for The Blood-Horse.

It follows the International Summit on Race Day Medication, EIPH and the Racehorse held at Belmont Park, June 13-14.

Begin debating? What’s to debate, except how best and how fast they can implement the changes necessary to bring American racing in line with other nations who have found effective, workable solutions to what appears to confound the industry in the United States, even after being properly schooled on exactly those points during the recent Summit.

Initial responses to this question are typically, it’s all about the money. Accepting that as a rational argument, because in America everything is always about the money, who in their right minds believe that they can continue to make money producing a flawed product that nobody wants to buy or use, or only use a year or two before it breaks?

In this case, of course, sadly the “it” is not actually a product, but a living, feeling being — the racehorse — who for the most part is abused from the beginning to the end of his or her career, and the only reason we are interested.

I admit I smirk at columnists and commentators who claim that horse racing is stronger than ever in North America. I wonder what planet they inhabit.

Mr. Mitchell at least seems to have his feet firmly planted on planet earth, but he may find himself in lonely company where he stands.

Joe Drape who writes for the New York Times is a comrade of sorts, and has written about the doping of racehorses from what I can tell, around about 2005. During the Summit, Mr. Drape wrote:

The American thoroughbred industry has acknowledged recently that it is in trouble, and on Monday, its counterparts from around the world told it why: it races too often, allows race-day medications that prop up inferior horses and is paying the price for these flaws with plummeting sales at breeding auctions.

That was about a week ago. What happened?

For further information, please see our in depth reports on breeding and drugs in horse racing.

Next up: Racing Through the Slaughter Pipeline