Cross-posted from The Paulick Report » 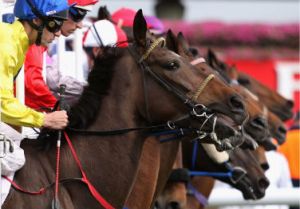 Erythropoietin is a hormone produced naturally by the kidney that helps regulate the production of red blood cells. Epogen is a drug developed by scientists in the 1980s to treat human diseases like anemia, where red blood cell counts are insufficiently low.

Epogen, or EPO for short, quickly found its way into human sports as the blood-doping drug of choice. The drug, which rose to prominence alongside anabolic steroids in the 1990s, rendered many Olympics results suspicious and carried now-disgraced cyclist Lance Armstrong to unprecedented success in the Tour de France from 1999 to 2005 (though he has been stripped of those titles for cheating).

Increasing red blood cells has been a goal in horse racing, too, through conventional treatments like vitamin and mineral supplements as well as illegal methods similar to human sports.

Epogen has been brought illegally into horse racing but no one knows how widespread its use has been. There is anecdotal information suggesting the winners of some of horse racing’s biggest events, dating back to the early 1990s, may have been treated regularly with EPO.

In human sports, a number of athletes paid the ultimate price for cheating. Published reports document the sudden deaths of dozens of young, otherwise healthy athletes who were suspected of blood-doping with EPO in the late 1980s and ‘90s. The drug increases blood viscosity and can lead to myocarditis, stroke, or heart attack.

How is EPO used in horses?

Continue reading at The Paulick Report to find out »

1 thought on “Tricks of the Trade: How EPO is used for blood-doping a horse”