Here are some numbers and other information gathered from the Calgary Humane Society, Vancouver Humane Society and/or the local media regarding the horses killed in Calgary Stampede events since 1986.

Peter Fricker, spokesman for the Vancouver Humane Society, said 61 horses have died from chuckwagon race-related injuries since 1986. The numbers below do not add up to 61. These numbers are arrived at by what have been reported by the media.

Please let us know if we missed anything.

2002 — 6
1 chuckwagon outrider horse died of a heart attack on July 5 after running in Heat 1
5 other chuckwagon horses killed, details not reported

CBC British Columbia reports: One man was hurt and three horses died after a crash at the chuckwagon races at the Calgary Stampede on Saturday night [July 14, 2007]. Tyler Helmig was thrown from his rig when it ran into the downed lead team of horses of another driver, Gary Gorst, whose rig had crashed in the first turn moments before, Stampede officials said.

How many horses has Gary Gorst killed? Why is he still driving? —Ed.

Note: After these incidents, the Stampede introduced changes aimed at making chuckwagon races safer for horses and competitors. Yeah, right.

More than 50 members of the UK Parliament signed a motion calling “on the Canadian government to take steps to end the immense cruelty to animals” at rodeos including the Calgary Stampede. 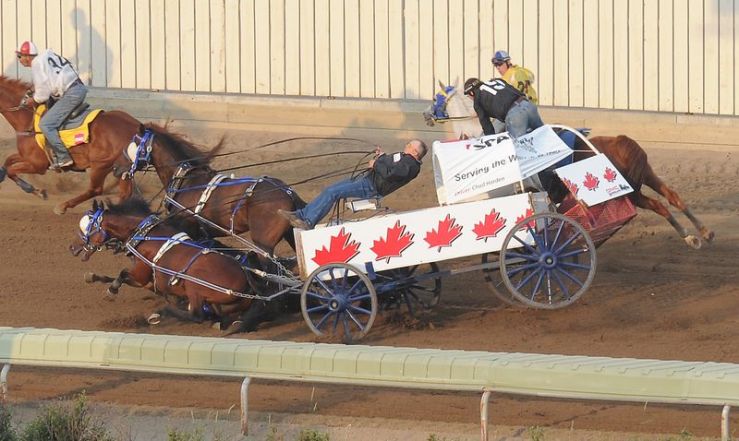 Protests were held Friday and Saturday by the Calgary Animal Rights Coalition who want an outright ban on rodeos. Hear, hear!

2014 — 1
A chuckwagon horse belonging to Reg Johnstone collapsed and died after completing the team’s training run.

“The horse was a 12-year-old thoroughbred named Denny, which had been owned by Johnstone for approximately five years. He was acquired from another chuckwagon driver after his initial career as a racehorse in the Vancouver area. The horse had last raced about a week ago at the Ponoka Stampede,” officials said.

The National Post reports: An outriding horse, a 16-year-old Thoroughbred from Dave Galloway’s outfit, had to be euthanized after he ruptured a suspensory ligament in his leg during the first heat. One of Layne Bremner’s outriding horses had to be euthanized for the same injury sustained by Galloway’s horse. It’s the second time one of Bremner’s horses had to be put down this year. On July 4, one of his wagon horses fractured his cannon bone after making contact with another wagon. Last Tuesday, one of BJ Carey’s lead horses was also put down after a collision with Shane Nolan’s wagon in the second heat.

NOTE: There are literally thousands of animals used behind the scenes to perfect the “cowboys” rodeo skills. These figures do NOT include horses who were injured or killed in practice or training.

QUESTION: Have you noticed how many of these horses are off the track Thoroughbreds?

17 thoughts on “Death by Numbers: Horses Killed at the Calgary Stampede — The Stats”