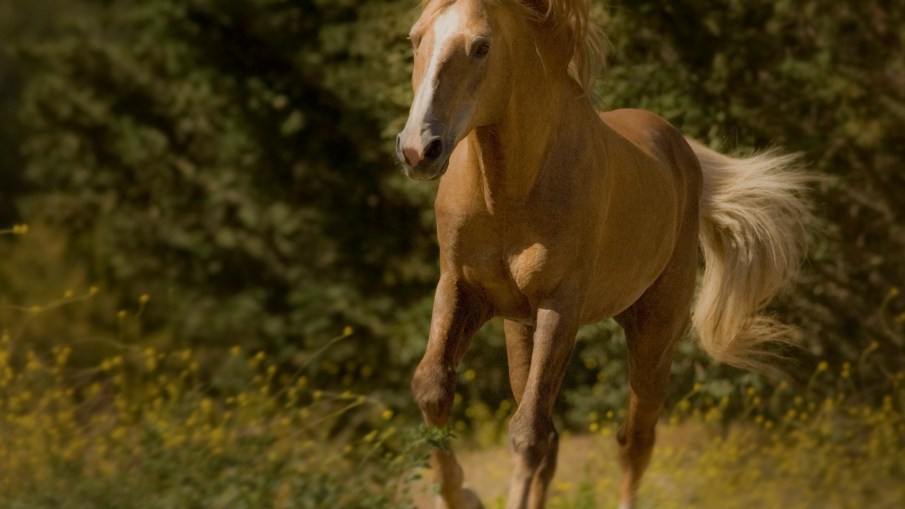 A stunning palomino stallion born in northwestern Nevada, Sutter was captured from public lands when he was barely two years old. Immediately following his capture, he was adopted to a private party through the Bureau of Land Management’s horse adoption program. During that time, Sutter endured tremendous abuse, including being whipped and left tied up under a hot tarp, and kept from food and water. Traumatized by this experience, Sutter was deemed “dangerous” and returned to the Bureau of Land Management marked to be destroyed. He was fortunately rescued and cared for by the Heritage Discovery Center (HDC), who would be a future colleague of Return to Freedom

For months, Sutter was so traumatized that if anyone even walked nearby his enclosure, he would slam himself into walls, attempting to free himself. With time, patience, and loving care, Sutter learned to trust humans again, appearing at venues including the Rose Bowl Parade, where he safely carried a novice rider, as well as in a number of educational documentaries and clinics.

When the HDC was forced to move and downsize in 2002, they contacted Neda DeMyo, founder of Return to Freedom, so that Sutter would find a safe forever home where he could continue to be an ambassador for wild horses through programs, clinics and events. Since that time Sutter has resided at Return to Freedom’s American Wild Horse Sanctuary, where he continues to not only thrive, but inspire equine awareness, rescue, and advocacy through his presence and story which is emblematic for tens of thousands of nameless and faceless wild stallions.

Sutter loves to connect with people, and is a stirring ambassador for the dwindling number of horses who deserve our promised protection on public lands. Sutter also reminds us all that when we extend love to animals, we receive it back, multiplied. For these reasons, Sutter is the 2016 ASPCA Horse of the Year.

5 thoughts on “Sutter is the ASPCA® Horse of the Year”