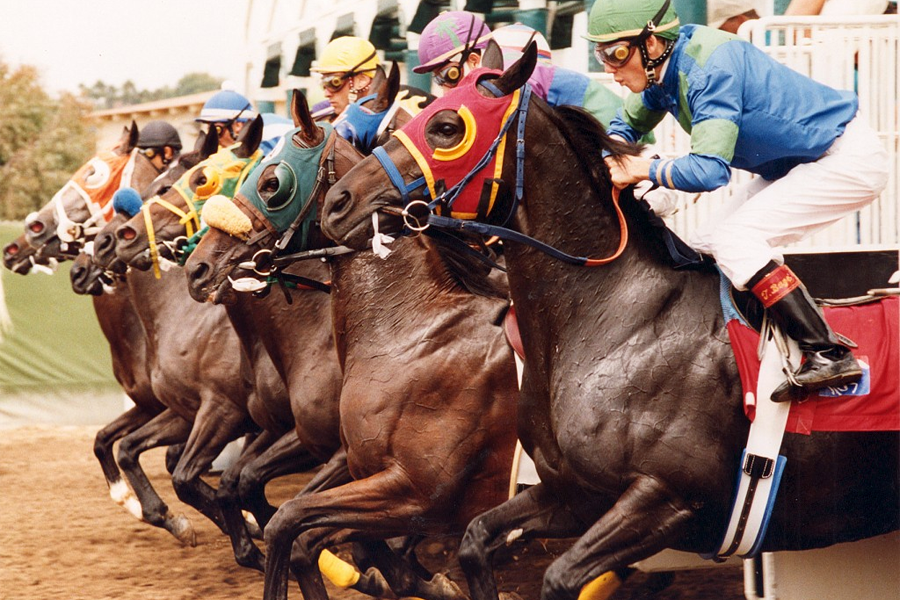 In the 6th race yesterday afternoon (yes, they put on horse races too), a 3-year-old filly named Presidential Air “broke down” – to be more specific, snapped a leg – and was euthanized. Dead.

Which leaves me wondering: How many of those 42,000-odd revelers were/are aware that part of the day’s entertainment was killed? More important, how many care?

Well the answer to that seems to be — no one.

The upbeat tenor of such a day can be undone in a moment, as was what happened in the sixth race when Presidential Air broke down at the top of the stretch in front of a sizable part of the crowd.

The sometimes horrifying realities of the sport were in full view as the 3-year-old filly rose to her feet and staggered with only three working legs. She went back to the ground as two men came running with the green tarp that tracks use to shield the crowd from the horse’s impending death and subsequent loading onto a van.

After that race the crowd thinned only slightly and the buzz quieted only a bit. By the time the eighth race, the featured Oceanside Stakes won by Monster Bea with Gary Stevens aboard, it was as if the tragedy of two races earlier [was] forgotten.

Jane Allin (who is on a well-deserved vacation) compiled a list of Del Mar’s kill figures over the past 15 years. Here’s what she found.

* As of July 15, 2016. By Jane Allin.
[1] See The Del Mar Conundrum; Bill Shanklin; HorseRacingBusiness.com; September 14, 2012. Note: Shanklin got his numbers from the California Horse Racing Board.
[2] PB — Patrick Battuello, HorseracingWrongs.com.

Horses died while racing at Santa Anita Park at more than double the rate of horses at the state’s other three major thoroughbred tracks over the last fiscal year, according to state statistics.

The fatality rate at Santa Anita, in Arcadia, rose significantly after a return to a dirt running surface in 2010 after three years of using a synthetic track, the data show.

The deaths of three horses during the production of the television horse racing drama “Luck” — which happened to be made at Santa Anita — has drawn recent attention to the issue. HBO canceled the series this month after the third incident in which a horse on the set suffered injuries and had to be euthanized.

Meanwhile on the East Coast Saratoga had its first kill before its meeting has even begun. Again, let’s listen to what Mr. Battuello had to say today on that front:

With the season opener still a week away, Saratoga ’16 has already recorded its first kill. 2-year-old Squire Creek broke while training yesterday morning and, according to the Gaming Commission, was euthanized on the track. The equine child was being prepped for his first race. For trainer Todd Pletcher, this makes 16 dead racehorses since 2010 – in NY alone.

It is revolting the rate they kill these horses. And the ages. 2 year olds and 3 year olds.

Why do these people not see they have a very serious problem?

This is horse racing.

Presidential Air’s death sparked back to back protests on Saturday and Sunday outside of the park. “This weekend starts the summer season of abusing and killing horses for profit and entertainment. It is beyond me to even think that in the year 2016 this is even legal,” said Ellen Ericksen, the protest organizer. (via NewsoftheHorse)